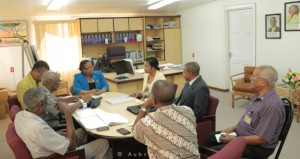 Prime Minister Moses Nagamootoo on Wednesday ordered the Chief Executive Officer of the National Communications Network (NCN), Lennox Cornette to apologise for using her pregnancy as the basis for removing her from anchoring the 6 O’clock news.

“It agonises me to get involved in what is an NCN management matter but, as a journalist and as a parent, I refuse to be silent on this occasion,” said Nagamootoo whose portfolio includes the state media.

Nagamootoo’s decision came one day after the state broadcaster’s Human Resources Manager, Tishika Da Costa apologised to Natasha Smith after a protest by executive members of the Guyana Press Association (GPA) and other outraged persons.

Sources said the Labour Ministry’s team appeared convinced that Smith was not removed from the TV news set because of her pregnancy. While the minutes of a management meeting seen by the GPA’s executive did not refer specifically to “pregnancy”, it referred to her “condition.”

Earlier Wednesday, top officials of the Labour Department also told several employers in the city that, among other things, it is illegal to use pregnancy or related conditions as a reason for taking action against workers.

“Employers were also cautioned against practices of unfair dismissal, which according to the Termination of Employment and Severance Pay Act of 1997  constitutes dismissal based on an employee’s… pregnancy or a reason connected with an employee’s pregnancy…”

Following is the full text of Prime Minister Nagamootoo’s statement.

I have advised the Chief Executive Officer (CEO) of the National Communications Network (NCN) to tender an unqualified apology to Ms. Natasha Smith for using her pregnancy as reason to remove her temporarily as News Anchor.

From information received and explanations given by the CEO, I am in no doubt that the removal of Ms. Smith was due to her state of pregnancy, and that the act is an attack on her as a woman and as a professional journalist.

I do not condone any such act and disassociate myself from the action in this matter by NCN.

Our coalition government stands for full equality of our women and their right to work or association must not be denied or in any way trampled by their free choice to be married or to remain single, or to bear or not to bear children.

I applaud all those bodies and individuals who came forward in condemnation of this act of discrimination against Ms. Smith who has earned respect for her professional presentation of the NCN News.

It agonises me to get involved in what is an NCN management matter but, as a journalist and as a parent, I refuse to be silent on this occasion.