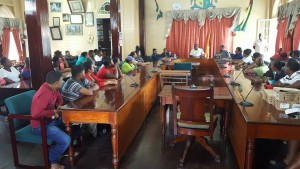 Bourda Market area vendors listening to Town Clerk, Royston King during a meeting with them at City Hall.

Bourda Market area fruit and vegetable vendors were Wednesday warned by Town Clerk, Royston King that they would be banned from selling on Robb Street if they do not keep the area clean and continue to encroach on the roadway and obstruct vehicular traffic.

“If we return after we would have lifted the suspension and find people dumping in places that they shouldn’t dump, we would just close off vending in that particular area at all times. In other words, there would be no going back, You have to keep the place clean,” said King who is Chief Executive Officer of Guyana’s capital, Georgetown.

King told the more than 40 vendors at a meeting held in the Council’s Chamber that they would be allowed to return to vend on Robb Street between Alexander and Robb Streets from Thursday afternoon. He said Wednesday would be used by fire fighters and municipal sanitation workers to clean the area.

By that time, he hoped that the vendors would formed a representative committee to meet regularly with the City’s administration for bargaining and evaluation,  and identify marshals to ensure that waste is properly disposed of on at the compactor on Orange Walk. He said vendors would now be expected to stay behind a line that would be drawn on Robb Street.

The Town Clerk told the vendors that they were removed from the area on Tuesday because they broke a previous arrangement to keep the surroundings clean and that they would have proper receptacles to dispose their waste. Instead, he said waste was being dumped near Mike’s Pharmacy rather than in a nearby compactor, drains were being clogged up with waste and vendors were encroaching on the roadway.

The Town Clerk assured that he was not asking the vendors to pay more, but pointed out that City Hall spends GYD$378,000 per day to remove garbage from outside Mike’s Pharmacy compared to the daily vending rates range from GYD$200 to GYD$600.

While the meeting between King, top City administration officials and vendors, another group was protesting outside the Minister of Communities, Ronald Bulkan’s office under the banner of the recently-formed Guyana Market 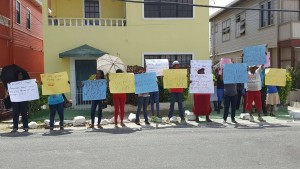 Vendors Union (GMVU). Their placards read “Bread out me mouth, Can’t Give me Biscuit,” “No meeting or nothing, just put off the road. We need justice,” “Single parent with four children to send to school,” “Royston King must go,” “Vendors owe farmers. How will we pay then if we can’t sell?” , and “We must grow more for who?”

He assured the vendors that the Mayor and City Council of Georgetown supported them in earning a living from selling in the market, but at the same time they must respect the Capital City by ensuring that the environment is clean. “This is not to put people out of bread but if you continue the way you are going, you yourself will not be able to earn a living after a while because the place will be so unhealthy you will all get sick and die,” said the Town Clerk. 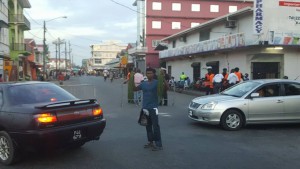 Tajekumar Outar who resorted to selling bora after he and his colleagues were told to stop plying their trade on Tuesday.

He urged them to stop using junkie (drug addicts) to dispose of garbage because they do not care if any is left behind or where they throw it. He warned that vendors would soon be locked up. “I have instructed the Constabulary that once they see any vendor employing any junkie that the persons who are employing junkies must now be arrested because, apart from the fact that they are taking advantage of those people, they (vendors) are not caring for the environment,” King said to the approval of several of the vendors.

Vendors were Tuesday very upset that the Town Clerk ordered the suspension of vending at that location and expressed grave concern that they stood to lose millions of dollars in fruits and vegetables.