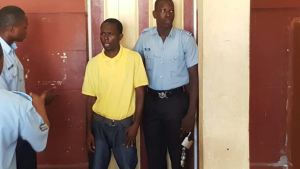 Thirty-four year old Terrence McLean who attempted to rob the Guyana Bank for Trade and Industry (GBTI) in the name of a notorious terrorist group – the Islamic State in Syria (ISIS) – has been jailed for three years after he made his appearance at the Georgetown Magistrates’  court on Thursday.
The man, who is unemployed, appeared before City Magistrate Judy Latchman and pleaded guilty to the charge which alleged that on Monday, June 28 at GBTI on Regent Street, he demanded for himself the sum of GYD$10M from Dahana Ramjit with intent to steal said amount.
McLean was sentenced to three years imprisonment after Magistrates Latchman considered the seriousness of the offense, the manner in with the money was demanded and the impact of the incident on society and the bank’s staff.
According to the prosecution fact, which was read by Vishnu Hunt, on Monday at about 9:20am, the accused entered the city bank and requested to speak with the manager. McLean then handed over a note stating “ISIS- there is a bomb in this bag give us $10M or you all die” after demanding the cash.
Immediately, an alarm was raised and police were summoned to the location. Upon the police’s arrival, McLean dropped a haversack he had in his possession and shouted “Allah Akhbar”. The bag was subsequently searched by ranks of the force but nothing of evidential value was found.
However, head of the Criminal Investigations Department (CID), Senior Superintendent Wendell Blanhum had said that a knife and documents were found in the man’s bag.
The unemployed 34-year old showed no remorse while addressing the court, where he said that “they [employees] should have handed over the money because if a next person come In with a bomb they all will die”.
In a surprising twist, the man expressed disappointment in the bank’s security system stating that it was flawed in how it handles issues related to threats.

Previous: Harmon to Jagdeo: “Diplomats don’t dictate to us”
Next: Ministry of Presidency’s Permanent Secretary arrested for alleged financial crimes