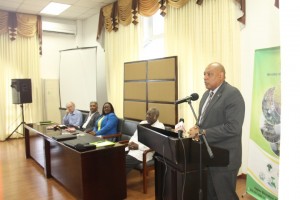 With Guyana expected to apply to the global transparency watchdog for extractive industries in November for membership, the newly-formed civil society organisation, Policy Forum Guyana, says effective monitoring of open and accountable management of Guyana’s natural resources will require a drastic changes in the existing system.

“If we are going to manage extractive resources, there is a whole range of infrastructural changes that have to take place. Our governance arrangements are nowhere near in place for this project shift,” Mike Mc Cormack said at the opening of a symposium for the establishment of the Multi-Stakeholder Group (MSG).

Mc Cormack urged participants to learn to see compromise as courageousness rather than weakness, educate themselves about technical requirements and the debates. Among the issues Mc Cormack said the MSG would have to ultimately address are illicit financial flows, reducing the influence of tax havens, beneficial ownership and the sharing of tax information.

The MSG mechanism is a key requirement for Guyana to become a member of the Norway-headquartered Extractive Industries Transparency Initiative (EITI). Minister of Natural Resources, Raphael Trotman said Guyana would be officially applying for EITI membership in November, 2016 after the MSG by consensus crafts a schedule in the coming months. “Being a member of EITI, along with observing sound macro-economic principles are key to making this a reality. Transparency, accountability and good governance are the bedrock for strong economies and strong societies,” he said.

Trotman also said proper fiscal management, well-balanced prioritization, engagement of stakeholders, effective revenue tools and inclusivity and collaboration could create an environment for the effective use of revenues received from gold, diamonds, other minerals , timber, bauxite, forestry and oil and gas. “Our government needs to ensure that the information required is available so that the amount and value of trade flows are known and taxed consistently and abuses of the law are prevented,” he added. 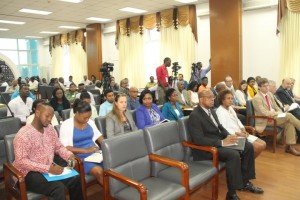 Attendees at the opening session of the EITI symposium held at the Arthur Chung Conference Centre.

Under the EITI system, the Minister of Natural Resources is required to determine the equal number of representatives to be part of the MSG.

EITI Consultant, Ana Maria Rodriguez, in her presentation, cautioned against anyone feeling excluded because their core representatives would be part of the MSG.

Membership of the MSG could be drawn from anyone, interest group or organisation once there is equal representation. “The fact that you are not in the actual group does not  mean you are not represented,” she said.  Those who are not in the actual MSG could be part of the extended dialogue table. She also told participants that authorities have the option of putting the MSG Terms of Reference in a Memorandum of Understanding, which is not legally binding, or public policy that has parliamentary approval.

The Policy Forum Guyana representative hailed the EITI’s MSG as a model that could potentially reform the country’s governance system brings an end to winner-take-all decision making. “The winner-take-all politics to which we are accustomed means that you are either in or you are out. The EITI arrangement of bringing together three centres in which the government has to argue it case rather than the normal arrangement where you have a statutory body that invites people to a whole lot of discussion and at the end of the day the government says now here’s what we are going to do,” he said.

Mc Cormack signaled that instead under the EITI the business sector and civil society would have to be persuaded before decision-making. “It starts to undermine the winner-take-all arrangement and if it works here, hopefully it could be replicated in other areas of society,” he said.

Speaking on behalf of the private sector, Hilbert Shields said from all accounts companies in the extractive sectors such as gold, bauxite and soon oil and gas have not been interacting with each other or with their umbrella oganisations. He said coming together, the businesses would be able to discuss the EITI’s responsibilities, expected benefits and meaningful engagement. For instance, he noted that residents of Region 8 (Potaro-Siparuni) have reasonable expectations for their development because that region produces about two million ounces of gold. “It’s not big brother coming and impose controls, it’s a mechanism  for improving communication and dialogue and have all people make informed decisions,” he added.