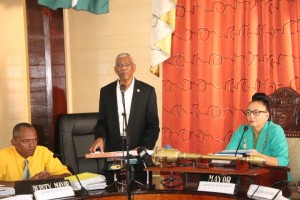 Moments after President David Granger said he wanted to see Georgetown vendors being properly housed, Town Clerk Royston King called on City Councillors to craft a policy on street vending and find a new location before November- the new deadline for the vendors to remove from a plot of land to which they have been relocated.

“The Council will have to find a place to relocate those vendors,” he said.

King announced that the Municipality was expected to get a  three-month extension for the vendors from Stabroek Market square to remain on the plot of land located at the corner of Hadfield and Lombard Streets. “We are likely to get an additional three months from the owner of the plot of land south of Parliament Building where they have the vendors who were relocated from the Stabroek Square,” he said.

More than 120 vendors were removed from Stabroek Market Square in early May and placed on the plot of land that, according to the Official Gazette is owned by Paul Daby whose Power of Attorney is  Hareshnarine ‘Chiney’ Sugrim.

A sub-committee of the Markets and Public Health Committee has been already established to formulate a policy on street vending and examine options for relocating vendors at the end of the additional three months. The Town Clerk warned that if that policy is not completed by November, the municipality would face serious problems. “If the Council does not come up with a policy and options as to where the vendors will be relocated, then we will have a problem,” he said.

King said now that the City administration has cleared the Stabroek Market Square, it was the responsibility of the elected body to relocate the vendors.

Moments earlier, President Granger, in an address to the City Council, said his administration would like to see street vendors, most of whom are poor, be properly accommodated.  “I would like to see during the tenure of office of this coalition government every vendor under a roof,” he said.

The President urged that efforts be made to explore the extension of existing market and give “those poor vendors roofs over their heads” so that they are protected from rain and sun while still having access to their customers.