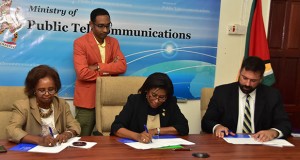 An Information Communication Technology (ICT) needs assessment project will get underway in hinterland and rural communities in Guyana, following a US$524,00o contract which was signed by the Government of Guyana, Germany-based Detecon Consultancy and the United Nations Development Programme (UNDP).

Titled “ICT Access and e-Services for Hinterland, Poor and Remote Communities”, the project is a starting point ICT study to find out among other things, what infrastructure, technical capacity, and legal framework are already there in poor, remote and un-served areas in Guyana.

During brief remarks Minister Hughes pointed out that for many years Guyana has been lagging behind the rest of the developing world because of the lack of technological resources to meet the demands and standards in almost every field of endeavour, for every service and product.

Minister Hughes said that the needs assessment project is a very important one, which allows Government to start an evaluation of the country’s ICT needs. The project will be out for funding to the Guyana Redd+ Investment Fund (GRIF).

“Most of us know that for many years what happens on the coast and what happens in the hinterland regions vary vastly and in fact, when we look at sectors such as education, commerce development, our hinterland and remote communities have really not been able to stay on par…when I visited Surama last year I had an opportunity to purchase one of the most beautiful indigenous hammocks made by a group of women there…that lady who crafted that beautiful hammock is dependent on a few people to visit Surama and to actually purchase,” Minister Hughes said.

Imagine what that young entrepreneur can do when she has access to technology, Minister Hughes said. She posited that she can create her own website and with facilities such as international shipping services and persons being able to pay online, the world is now her market and not just a few persons passing through Surama.

The minister explained, that the programme will provide for the installation of ICT infrastructure and networks for internet and telephony access for hinterland, poor, and remote communities. Training will also be provided not only for residents in those communities, but also for Government staff and entities such as the E-Government Unit.

“When this government took over the reins of statehood last year, one of the first promises President (David) Granger made was to ensure that our technologies would be brought up to par with the rest of the world … to use a well-known cliché, bring Guyana into the 21st Century and this project puts Guyana firmly on the road to achieving that objective,” Minister Hughes noted.

Minister Hughes explained that the process began by the “writing a Bill (the Telecommunications Bill) that makes sense”.  The Telecommunication Liberalisation Bill was tabled in the National Assembly on May 24, 2016. It is expected that the legislation will be passed within a few weeks, after which enabling regulations will be created, she further stated.

Meanwhile, Musa said that project focuses on connecting the coastland with the hinterland through ITC, in order to expand economic development.

To assist the Government in this process, UNDP conducted a competitive international bidding process. UNDP received 14 expressions of interest from prospective bidders who participated in an online pre-bid conference where they were allowed to ask questions regarding the project. Of the 14 bidders, four firms submitted proposals.

The intention is to provide the wherewithal for citizens living and working in any part of Guyana, from the North West District to South Rupununi, to have access to E-Government services which will ultimately change the lives of every Guyanese and ultimately transform the country.