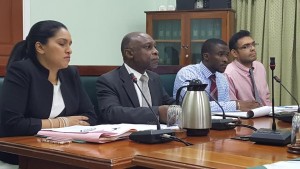 Rice has been making up the bulk of Guyana’s exports to Brazil under a preferential trade agreement mainly, the Foreign Relations Sectoral committee was told Thursday.

“The main factor contributing to that jump…in this case the increase in Guyana’s exports to Brazil seem to be accounted for by the exports by Simpson’s Santa Fe Farm as well as Guyana Rice Development Board and Pak and Sons exports of rice to Brazil,” Greenidge said.

Figures presented to the sectoral committee show that Guyana sold GYD$1.8 billion worth of rice to Brazil in 2015 and GYD$264 million up to June, 2016.

Trade Officer at the Ministry of Foreign Affairs, Sherwyn Naughton said that so far all of Guyana’s exports to Brazil for this year have been been rice, and of the GYD$1.881 billion worth of exports to Brazil in 2015, GYD$1.842 was for  rice. Naughton said other exports to Brazil included wheat, pasta, alcohol, bauxite, textiles and wooden furniture. “They are in very small quantities so rice has been the major export to the Brazilian market making up ninety percent or more of the exports,” he said.

Guyana is allowed to sell, among other products, 10,000 tons of rice and sugar to Brazil under the Partial Scope Agreement that allows for either duty free or 50 percent or less duty-free access for some categories of products manufactured in either country. 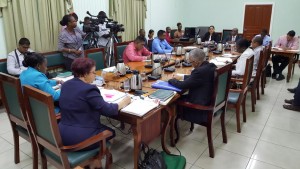 The Parliamentary Committee on Foreign Relations in session on Thursday under the chairmanship of the PPPC’s Gail Teixeira (backing camera in blue dress).

The Foreign Affairs Minister said trade has improved between Guyana and Brazil since Bon Fim was approved as a port of entry and the Takatu Bridge was built in 2009.

Figures presented to the sectoral committee show that Guyana purchased more than GYD$5.1 billion in goods from Brazil in 2011 with about GYD$2.32 billion to date in 2016. There  was a decline in 2014 and 2015 possibly due to a depreciation of the Brazilian currency.

“It is very much in favour of Brazilian,” said Greenidge. While the private sector has not requested an addition to the list of the 830 tariff lines, he acknowledged the suggestion by Teixeira to conduct periodic outreaches to chambers of commerce in the Rupununi and elsewhere to ascertain if there are other products that they would like to have added. An administrative commission that monitors implementation of the Partial Scope Agreement is supposed to meet annually but there has been no meeting since 2010.

Under the Partial Scope Agreement, Guyana is entitled to sell red peppers, bottled rum, copra fruits and vegetables, calcined bauxite, PVC pipes, corrugated cardboard, and alu-zinc sheets. Brazil is entitled to sell machinery parts, building materials, agro-based products, pastas noodles jams, jellies, rum and spirits, and pharmaceuticals. In some instances, there is a quota system to ensure that there is no market distortion and domestic producers are not displaced. In apparent response to the fact that Brazil has a larger number of product lines compared to Guyana 127 tariff lines. “Guyana has a relatively limited range of products that it can export, almost a feature of our under-development but also a feature of the limited capacity of our exporters,” he remarked.