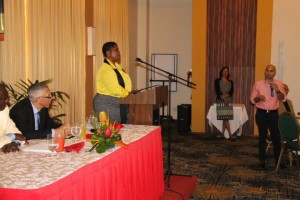 Minister of Business, Dominic Gaskin on Thursday rejected claims  and instead he called on the private sector to team up with government in developing a long-term strategy to reduce reliance on primary products that account for the bulk of export earnings.

“We are not the ones with an economic crisis on our hands and this is important because a crisis calls for short-term decisions often at the expense of long-term planning,” he said.  He supported his position with figures showing that Guyana’s economic growth was 5.2 percent in 2013, 3.8 percent in 2014 and 3 percent in 2015. He added that the country’s Gross Domestic Product was US$3.2 billion and total public debt was US$1.5 billion at the end of 2015.

Gaskin  announced that a model public-private dialogue body was being developed and would soon be proposed to the private sector. He said such a mechanism would be used for jointly identifying priorities, developing comprehensive solutions for recommendations to Cabinet and monitoring the implementation of the proposed solutions. “It is my hope that it will be accepted by the private sector as a new, effective and long term partnership for ensuring that the well-being of Guyana’s economy receives the attention it deserves,” he said.

After Gaskin’s address to the Guyana Manufacturing and Services Association’s (GMSA) Business Luncheon, Junior Vice President of the Georgetown Chamber of Commerce and Industry (GCCI), Nicholas Boyer confronted him with a direct question on what government planned to do address the reality of a 30 to 40 percent decline in sales by many businesses as a result of falling commodity prices and reduced employment. “All of these are going to trickle through the economy. My question is very simple: What policies are you going to put in place over the next twelve months that may have the effect of improving these on the ground or leading conditions for us?,” he said. 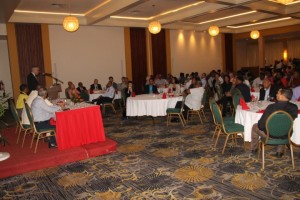 Responding, the Business Minister stressed that Guyana has failed over the past 50 years to diversify its economy and so there continues to be heavy reliance on bauxite gold rice sugar and timber for 83 percent of its export earnings. He explained that Guyana’s “economic downturn” was due to a decline in global prices for commodities such as those that the country’s producers. “Right now, we are a commodity exporting economy and global commodity prices are down and that is the genesis of our economic downturn. It is simple as that!,” he said.

Gaskin said there was no short-term solution to putting a system in place to withstand fluctuating global commodity prices. “If we just keep patching- I don’t know what you are suggesting in terms of some alleviation over the next twelve months to the issues currently facing our economy- but I think it will be a great mistake for us to continue to accept or continue not to invest in value-added industries or to continue not to invest in the services sector and hope that we can somehow survive another fifty years depending on the export of a handful of primary products,” he said.

The Business Minister called on the private sector to join with government in establishing a mechanism “a national blue print” that is owned by Guyanese rather than being distracted by the “notion of an economic crisis.”

He appealed to the private sector to team up with the Guyana government in the development and improvement of  road, aerodromes, bridges and ports, energy, information and communications technology and sea defence  to make the economy more attractive to investors. “This is, therefore, a platform upon which Guyana could become a model for sustainable economic development and this is the model that our government is asking you to believe in and to invest in because without the private sector there can be no development,” he said.

GMSA President, Eon Caesar said his organisation has been for years calling for value-added production to help the country move away from primary products that remain vulnerable to international prices and market availability. “We are aware that the entire world caught a cold when the prices for oil and gas took a nosedive more than a year ago. Then, Guyana’s economy was knocked sideways when global prices for gold slumped. Our mineral prospectors lost a lot of money and equipment. Venezuela cancelled our main rice market, while the sugar industry struggles to regain some measure of balance,” said Caesar.