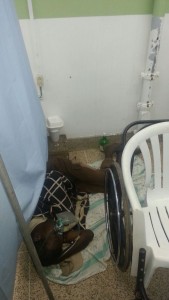 A seriously ill patient lying on the floor of the Accident and Emergency Department of the Georgetown Public Hospital Corporation.

GPHC’s CEO, Alan Johnson said that as of Monday morning measures were put in place to accommodate such patients in another area of the hospital.

Hospital sources said the problem has been occurring for the past three weeks . “These are TB patients in the triage area that are admitted but no space in the ward and emergency unit presently, photos were taken last night in the unit. It is unacceptable,” one source told Demerara Waves Online News.

The CEO was shocked when he was shown a photograph of an evidently very ill patient lying on the floor of the Accident and Emergency Unit with a respirator on. He queried why the patients could not have been placed on stretchers instead.

The medical staff members were worried that Tuberculosis (TB) patients, who are left at 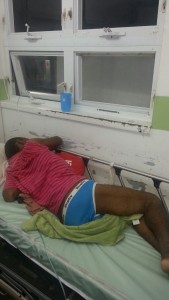 A patient, who was admitted, but ended up remaining at the Accident and Emergency Unit for days.

the Accident and Emergency Unit for days due to lack of ward space, could infect other patients, including the elderly and children, who go to that section of the health care facility.

The Accident and Emergency Unit, according to sources, has been also overcrowded with patients just sitting for 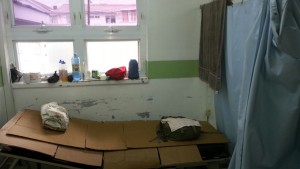 two straight days in chairs, beds or the floor with hardly any medication administered.

The CEO, however, said that except for two drugs, the GPHC was well stocked with all other medications.

Sources said the Guyana Public Service Union (GPSU), which represents medical personnel at the GPHC, was aware of the problem but appeared to have done little to alleviate it.