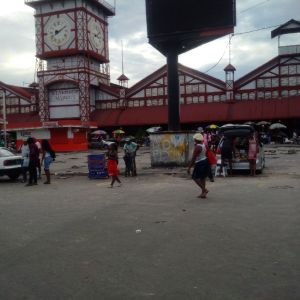 The Guyana government has taken a decision to order a review of the Georgetown parking meter contract, Minister of State Joseph Harmon announced Wednesday.
Harmon made it clear that government was not keen on overreaching into the work of the council but the City was important to the lives of all Guyanese.
“We respect the independence of the council, …we will be looking at illegalities,” he said.
City Mayor Patricia Chase- Green, who led a three-member delegation to Mexico on a parking meter awareness visit, has said that it the project would be rolled out on September 1, 2016.
The agreement between the Georgetown City Council and National Parking Systems/ Smart City Solutions, he said, would be reviewed by the Ministry of Foreign Affairs and the Attorney General’s Chambers.
Harmon said Central Government’s review had nothing to do with the rates for parking on selected streets in Georgetown.
Cabinet was briefed on the issue by Minister responsible for Local Government, Ronald Bulkan amid lingering concerns about transparency of the deal.
Deputy Mayor, Sherod Duncan has said that if Central Government supports the agreement, he would remain silent but stick to his concerns that the companies have no track record in providing parking meter services in any other country.
Bulkan has said that major concerns by at least four City Councillors with whom he has met include the fact that 80 percent of the revenues would be going to the companies.
However, the Deputy Mayor has said that the company would be investing US$10 million and employing more than 100 persons to operate the high-tech system.

Previous: Five escape unhurt in plane accident
Next: Guyana citizen charged with falsifying an application for a U.S. passport