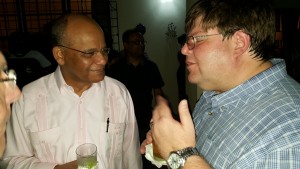 Outgoing Deputy Chief of Mission of the US Embassy in Guyana, Bryan Hunt (right) chatting with General Secretary of the opposition People’s Progressive Party, Clement Rohee at the farewell reception held Friday night.

Outgoing Deputy Chief of Mission of the United States Embassy, Bryan Hunt Friday night called for an end to winner-take-all and race-based politics in Guyana.

Addressing a farewell reception hosted by American Ambassador to Guyana, Perry Holloway, the Charge D’Affaires urged Guyanese to push ahead with constitutional reform. “Significant constitutional reform is essential. Power must be decentralised. The winner-take-all system must be abolished. Communities must be given greater control at the local level,” he said.

In apparent reference to the David Granger led administration’s social cohesion agenda, Hunt strongly suggested that repairing the divisions in Guyana’s society depended heavily on constitutional reform. “Regardless of who sits in government, about half the population feels completely excluded. This has to change. And bringing ab0ut that change requires going beyond conferences and workshops on social cohesion.

The American envoy also had some words of advice for political parties whenever they are defeated at the polls. “Those who lose elections, whether in the past, present or future need to accept their defeat and relinquish power gracefully rather than railing against “the system,” he said.

When the People’s National Congress (PNC) lost elections in 1992 for the first time in 28 years, there was widespread riot and looting in the city as some leaders in that party had felt that the party should have held on to power. There were also riots in 1997, 2001 and 2006.

When the PPP-Civic was defeated last year for the first time in 23 years, that party had appeared reluctant to give up power on grounds that it had been cheated and that sections of the international community had conspired to remove it from office. “Remember that the parliament ultimately belongs to the people, not the political parties. Party interest must be subservient to national interest,” Hunt added.

Among those present and listening to Hunt with rapt attention were several government ministers, the PPP General Secretary and members of civil society.

Hunt, who at one time was interim head of the American embassy in Guyana,  also called for an end to social exclusion and genuine equality of opportunity for all Guyanese. Clearly referring to the provision of boats, outboard motors, tractors, solar panels and other items to Indigenous Amerindian communities ahead of general elections, the American diplomat said that section of society must not be used as electioneering objects. “Indigenous communities must receive the support that they need to see genuine socio-economic development and that has to go well beyond hand-outs of goodies during election years,” he said.

Hunt’s next tour of duty takes him to Mozambique.