Three charged in connection with grenade outside Kaieteur News 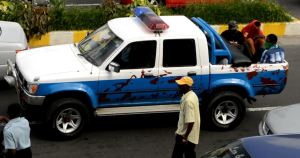 Three men were on Wednesday remanded to prison by Chief Magistrate Ann McLennan after they were charged in connection with he recent grenade attack on publisher of Kaieteur News, Glen Lall earlier this month.

The court heard that on June 4, at Saffon Street, the trio, along with others, unlawfully and maliciously conspired to endanger lives by way of explosion of a grenade. The trio who were unrepresented were not required to plea to the charge and were remanded to prison until July 7, 2016.

Police prosecutor Deniro Jones objected to bail on the grounds of the gravity and penalty of the change.

The police are still to capture 20-year-old Shemar Wilson, called ‘Abdue’, who is also wanted in connection with the grenade attack on Lall. Wilson is said to be from 43 North Sophia, Georgetown, and Lot 51 West La Penitence.

A fragmentation grenade was, on the evening of June 4th tossed near Lall’s vehicle outside the newspaper’s office and printery on Saffon Street, Charlestown. Though the device did not explode, it was later discovered that the pin had been detached from it.
First to be apprehended by the police was a 19-year-old man who reportedly confessed to being the driver of a Toyota Spacio, bearing number plate PSS 5252 – the vehicle identified as the one used by the perpetrators to carry out the attack. The vehicle was subsequently found abandoned on Norton Street and Mandela Avenue.
On Saturday last, at least 12 persons linked to the attack were in custody assisting with investigations.

Previous: 20-year old father of one charged with murder of Timehri mechanic
Next: Barbados-bound young woman allegedly caught with cocaine strapped to body