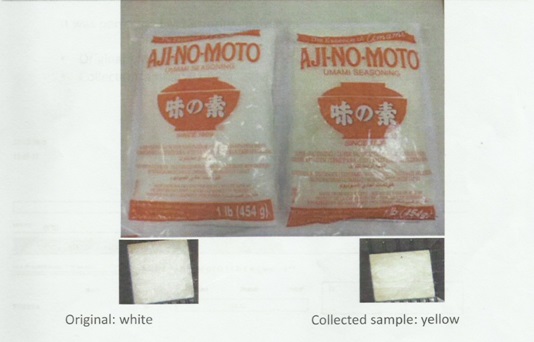 The Food and Drug Department has been seizing fake  Aji-No-Moto which is of a different colour and is being sold cheaper than the original product and bad for consumers’ health.

The Department of the Government Analyst says it has since seized and removed the counterfeited Ajinomoto from several stalls and supermarkets in the lower East Coast area, but was recently denied access to the premises of the suspected Importer. Environmental Health Officers in outlying regions, the department said, have since been instructed to engage in the crackdown against the bogus product.

Director of the Food and Drug Department, Marlan Cole warned that persons caught selling fake or substandard products could be charged and placed before the courts. “Persons found deliberately offering for sale items of food that is not according to the prescribed standard is guilty of an offence and can be prosecuted under the Laws of Guyana Food and Drug Act Chapter 34:03 Section seven (7).”

Cole called on wholesalers, retailers and consumers to ensure that the packages of Ajinomoto are checked for the highlighted difference between the original and counterfeited Ajinomoto which can cause serious health problems. 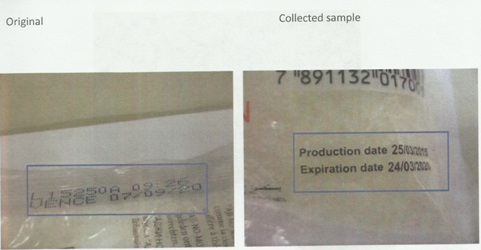 “Using the counterfeited Ajinomoto can therefore result in excessive salt (sodium) intake by consumers since more Ajinomoto would be added in food than normal to reach the required level of aroma and / or taste. This is of public health significance since; excessive salt (sodium) intake is a contributing factor in the epidemic of Non-Communicable Diseases (NCDs) in our society that results in obesity, hypertension and congestive heart failure.”

The counterfeit Aji-No-Moto is being sold in one pound, 200 gramme and 100 gramme packets traded particularly in outlying areas.

The Food and Drug Department explained that the original product is made in Brazil and the official distributor is Continental Agencies Limited of Industrial Estate, Ruimveldt, Georgetown. The authority said a carton of 50 packs X 454 grams of the original Ajinomoto cost approximately GYD$20,000, while the cost for a carton of the counterfeited product is only GD$14,000.

Laboratory analysis conducted for Purity both in Brazil and Japan revealed that the original product is 99.90% pure while the counterfeited product is only 91.63% pure.