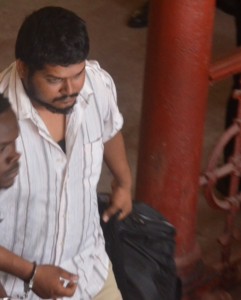 Two persons were Monday arraigned for allegedly attempting to traffick more than nine kilogrammes of cocaine in frozen fish to the United States (US).

They pleaded not guilty to the charge that states that on June 8, 2016 at Cheddi Jagan International Airport, (CJIA), Timehri they  trafficked 9.44 kilogrammes of cocaine.

Ali and another unknown person own an aquaculture farm.