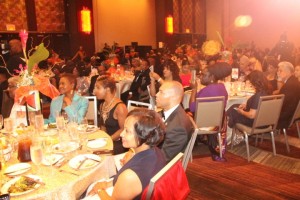 A section of the attendees at the Guyana Jubilee State Dinner at the Sheraton Hotel, Manhattan, New York.

Guyanese are being encouraged to protect rather than consume the country’s wildlife.

Addressing a State Dinner at the Sheraton Hotel in Manhattan Saturday night, President David Granger listed a number of “giant” wild animals that are unique to Guyana.

The Guyanese leader’s comments came weeks after there was a wild meat fest in Georgetown, Guyana as part of activities to mark Guyana’s 50th Independence Anniversary. “If you want wild meat, I can direct you but leave Roraima’s alone.”

While pointing out that his administration did not oppose Russian, Chinese, Brazilian and Canadian companies, President Granger also used the opportunity to again woo overseas-based Guyanese to invest heavily  their capital and expertise in the land of their birth so that the economy no longer depends on primary products like bauxite, gold, sugar, rice and timber. “It is better to have Guyanese companies. You can invest and prosper as readily as foreigners. You are family, please,” he said.

The President did not announce any special package of concessions for Diaspora investors.

He also reiterated his call for United Nations Secretary General, Ban Ki Moon to refer the border  controversy between Guyana and Venezuela over the 1899 Arbitral Tribunal Award to the International Court of Justice also known as the World Court. “We cannot spend the next fifty years in the shadow of a territorial threat and we are asking the Secretary General of the United Nations to bring this claim to an end. Let’s go to court and settle it,” he said. Venezuela has objected to Guyana exploring and exploiting gold and oil onshore and offshore in an attempt to scare away foreign investors.

He also cited the need for national unity to exploit Guyana’s abundant natural and human resources.