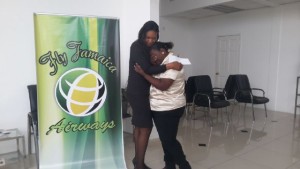 A Fly Jamaica representative comforts Lovern Williams-Oliver. The airline presented her with a free return ticket so that she can attend the funeral of her daughter, Shemel Mercurius, who was shot dead on May 31, 2016 while babysitting a three-year old cousin.

The woman, whose daughter was shot dead in Brooklyn, New York last month,  is now set to travel to the United States (US) to say final goodbye to 16-year old Shemel Mercurius.

Lovern Williams-Oliver praised Mark Benschop of the Benschop Foundation for assisting her with completing the visa application form and approaching Fly Jamaica to secure a return ticket. “He is so wonderful. I can’t begin to tell him how much I thank him,” she said.

Williams-Oliver plans to leave Guyana on Friday ahead of the funeral planned for next week Tuesday. Mercurius was shot dead on Tuesday, May 31 while she was babysitting.

In an earlier interview, she recalled her last conversation with the 16-year old girl, cautioning her against having a boyfriend and urging her to focus on her studies so that she could achieve her goal of becoming a midwife.

New York Police have since arrested and charged 24-year old Taariq Stephens with Mercurius’ murder. At the time he invaded the house, the teenage girl was babysitting her 3-year old cousin who was unharmed.

Benschop remarked: “She wants answers just like everybody else.”