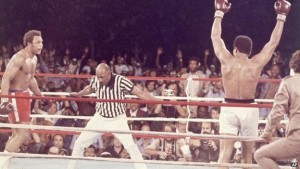 Muhammad Ali has died at the age of 74, a family spokesman has said.

The former world heavyweight boxing champion, one of the world’s best-known sportsmen, died at a hospital in the US city of Phoenix, Arizona, after being admitted on Thursday.

He was suffering from a respiratory illness, a condition that was complicated by Parkinson’s disease.

The funeral will take place in Ali’s hometown of Louisville, Kentucky, his family said in a statement.

Nicknamed “The Greatest”, the American beat Sonny Liston in 1964 to win his first world title and became the first boxer to capture a world heavyweight title on three separate occasions.

Crowned “Sportsman of the Century” by Sports Illustrated and “Sports Personality of the Century” by the BBC, Ali was noted for his pre- and post-fight talk and bold fight predictions just as much as his boxing skills inside the ring.

But he was also a civil rights campaigner and poet who transcended the bounds of sport, race and nationality.

Asked how he would like to be remembered, he once said: “As a man who never sold out his people. But if that’s too much, then just a good boxer. I won’t even mind if you don’t mention how pretty I was.”

Ali turned professional immediately after the Rome Olympics and rose through the heavyweight ranks, delighting crowds with his showboating, shuffling feet and lightning reflexes.

British champion Henry Cooper came close to stopping Clay, as he was still known, when they met in a non-title bout in London in 1963.

Cooper floored the American with a left hook, but Clay picked himself up off the canvas and won the fight in the next round when a severe cut around Cooper’s left eye forced the Englishman to retire.

In February the following year, Clay stunned the boxing world by winning his first world heavyweight title at the age of 22.

He predicted he would beat Liston, who had never lost, but few believed he could do it.

Yet, after six stunning rounds, Liston quit on his stool, unable to cope with his brash, young opponent.