“Corruption in Guyana is most widespread outside of government”- Pres. Granger 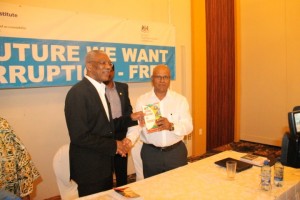 President David Granger has suggested that anti-corruption critics of his government should turn their attention to the private sector, individuals and other organisations where the scourge is more rampant.

“It is my view that corruption in Guyana is most widespread outside of government. The crimes of tax evasion, contraband smuggling, narcotics trafficking, trafficking in persons, money laundering- all contribute to corruption,” he said Saturday night, ( May 28, 2016) at the launch of former Auditor General, Anand Goolsarran’s book titled “Governance, Transparency and Accountability.”

Transparency Institute of Guyana Inc. (TIGI) is on record as criticising the now one-year old Granger-led administration, citing two his ministers- Junior Minister of Natural Resources, Simona Broomes and Minister of State, Joseph Harmon- for conflict of interest. Brooms and Harmon have since denied that they had found themselves in conflict of interest situations.

The President said government could not fight corruption alone because members of the public were also complicit and the private sector, offshore banks and tax havens were beneficiaries. He cited the need for the public, civil society, and the international community to play a part in changing attitudes towards corruption. “I urge you, all Guyanese, to be vigilant not only against the abuse of power by the government but also by the abuse of trust by the private sector,” he said.  The President observed that some people ascribe corruption as the abuse of entrusted power for private gain, but in reality the real sources of corruption are evidence in other crimes such as bribery, contraband smuggling, clientelism, cronyism, fraud, graft , nepotism. “These are all aspects of the monster of corruption. These crimes can escape detection because of the lack of transparency and that is why some people like opaque transactions because they conceal corruption, they can go unpunished because of a lack of accountability and they can flourish because of weak governance,” he said.

He cautioned Guyanese against believing that corruption is confined to law enforcement agents and other government employees. “It would be hypocritical to think of corruption only of a few crooked cops or revenue clerks who stretch out their hands for bribes. Bribery is crime, indeed, and it must be prevented, it must be punished,” he said.

The Guyanese leader said while his government was committed to excising corruption and improving transparency and probity in public life, other non-state actors must be assisted in fighting the problem which deprives government of revenue that is needed to improve various public goods. “We also need the support of the private sector to remove corruption in the private sector among businessmen, among smugglers, traffickers, gun-runners, money launderers so maybe criticising the government does not ensure the absence of corruption,” he said.

He contended that corruption studies ignore the central role of the “real rogues” such as builders of fuel smuggling vessels, conspirators of importers and exporters of illegal drugs at un-monitored airstrips and numerous creeks and rivers, gold and diamond smugglers who avoid paying royalties, back-trackers and dodgers of National Insurance Scheme and Income Tax payments.

In apparent reference to recent disclosures in the Panama Papers that have been leaked from the law firm, Mossack and Fonseca, the President added that such studies tend to ignore foreign destinations of dirty money. “The practice of good governance, transparency and accountability are more than the antidote for corruption in government. They are also a remedy for ridding the disease of corruption in the private sector, in professional organisations, in civil society and also in international organisations,”

The President acknowledged the need for very strong institutions like the Public Procurement Commission, Integrity Commission and the Public Service Commission to prevent Guyana from being relegated to a rogue state. Granger said he was interested in good governance, accountability and transparency, effective government policy, a regulatory framework, political stability and a representative democracy. He said corruption weakens enforcement of the law, democratic values, accountability, transparency, public trust in governance and institutions of government.

Granger said he was interested in good governance, accountability and transparency, effective government policy, a regulatory framework, political stability and a representative democracy.