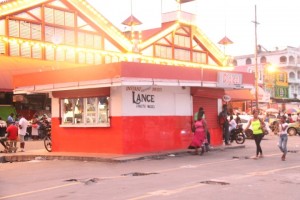 The owners of two business premises at the Stabroek Market area on Tuesday secured High Court injunctions, blocking the Town Clerk from demolishing their buildings that house the services that they have been providing for

The owners of the Island Restaurant (formerly K&VC ) and Lance Photo Works secured the injunctions on Tuesday. The Town Clerk, Royston King, has been given until June 7, 2016 to file a response before the High Court makes a decision on whether to make the injunctions final or throw them out.

Their legal teams are led by Attorney-at-Law, Nigel Hughes from the law firm of Hughes, Fields and Stoby.

K&VC proprietors Kellyan Clarke, Kendra Clark and Elva Hawker and the owner of Lance Photoshop, Lancelot Kennedy have blocked the Town Clerk or his servants or agents from entering and/or attempting to enter dismantle and/or attempting to dismantle the premises until a hearing and determination of the summons.

The Dread Shop that once adjoined K&VC building has been already demolished.

Lance Photoshop is located in the former bus terminal building for Motor Transport (yellow bus) and its successor, Guyana Transport Services Limited (GTSL) with which he has lease agreement for the location and purchase of the building dating back to June 27, 1991, six years after he began occupying the building located just outside the Stabroek Market.  During 2007 Kennedy said he sublet a art of the property to Richard Singh who operates a Digicel Outlet at the said location. 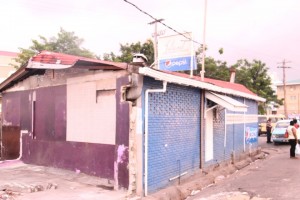 Representatives of the property, which now houses Island Restaurant and is located on A Water Street, Russell Square, Stabroek Market said in court papers that a legal case between the owners and the Chief Works Officer of the Ministry of Public Works and Communications , now the Ministry of Public Infrastructure, is the subject of mediation that has been approved by the High Court. That case dates back to December 4, 2009 when the Ministry of Public Works and Communications issued a notice to dismantle the building on the basis that the stall was encroaching on the road reserve and that it was the sole authority responsible for the management of that location. Although the Attorney General’s Chambers appointed mediators earlier this year, they said the Chief Works Officer failed to attend the first mediation session and the matter was adjourned to a date to be agreed between the lawyers. No date has been fixed.

“We are advised by our Attorneys-at-Law and verily believe that the actions of the defendamt are an act of defiance of the orders of the Court of Appeal to have the issue of tehe occupation of the said property mediated. … that the actions of the defendant are a direct attempt to bring finality to he legal proceedings currently engaging the Court of Appeal without he necessity of awaiting a decision of the Court of Appeal,” they said. They fear that if they building and contents are demolished, damaged and destroyed, they would suffer losses amounting to more than GYD$5 million.

The proprietors, Kendra Clarke and Elva Clarke, are also claiming more than GYD$100,000 for trespass allegedly committed on May 19, 2016. They said that dating back to 1981 they received expressed permission and consent by the Town Clerk to erect a stall at Stabroek Market Square for the purpose of operating a snackette and beer garden. Subsequently, they said, the Public Health Department of the City of Georgetown for the purpose of operating an eating house suitable for the sale of food, malt and liquor. They operated the stall until the end of 1994 when, according to them, they rented the stall the stall until the end of 1994 when they rented it to Keith Clarke and Vonies Clarke until they died in 1994 and 1997.  After their deaths, their daughter Kendra Clarke operated the stall from 1997 to presnet.

Like the owners of the property at A Water Street, Russell Square, the owner of Lance Photo Works said in court papers that he has paid up all rates and taxes to the City Council. He also wants damages of more than GYD$100,000 for trespass of  his property on May 23, 2016.

Kennedy said his rates and axes are current since he paid City Hall and they accepted GYD$379, 406 as recently as April 2016, resulting in the Town Clerk’s acknowledgment of  “my occupation of the said premised as a leaseholder.”

The Lance Photoshop owner outlined in court documents that the Town Clerk broke an agreement to offer him an alternative location at the corner of Brickdam and Avenue of the Republic .

After being shuffled back and forth between Minister of State, Joseph Harmon and City Councillor Oscar Clarke and the Town Clerk, he said that on Saturday May 21, 2016 when he returned to King’s office but the defendant did not turn up and no lease was prepared.  He added that on Monday, May 23, 2016 the Town Clerk told him that he had no lease and could not give him a lease but would write a letter to GPL and GWI so he could get light and water at any new location he wanted.

Kennedy said in the court papers that he fears demolition of his building, that he was never issued with a notice to vacate the premises and that he is seeking protection under the Landlord and Tenant Act.

“I cannot be removed unless I voluntarily vacate the said premises or pursuant to a court of competent jurisdiction…The Town Clerk’s proposed actions are unlawful and a breach of the implied covenant of peaceful enjoyment,” he said.

Kennedy further argues that the own Clerk’s proposed actions will interfere with the legitimate third party rights of Richard Singh who is a lawful tenant of mine in occupation of he said premises.