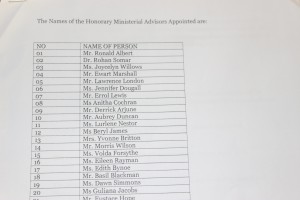 The APNU+AFC administration has clarified that thirty-three persons appointed as Honorary Ministerial Advisors are working for free and without diplomatic passports.

This was confirmed by Minister of State Joseph Harmon who was responding to questions raised in the National Assembly by Opposition members of Parliament.

Harmon in his written response said that the “relevant qualifications include their willingness to contribute to the struggle for improved governance.”

He made it clear that formal or academic qualifications were not a prerequisite for in making such appointments.

The Minister said that the persons were appointed to establish relations between individuals, organisations and businesses in the diaspora.

They are tasked with encouraging those persons to return to Guyana and contribute to the country’s development.

“Their appointments were all pro bono,” the answer stated later noting “there is no cost to the treasury in relation to the persons appointed.” 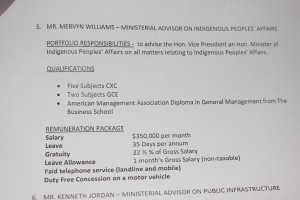 dvisor to the Ministry of Indigenous Affairs and Kenneth Jordan Ministerial Advisor on Public Infrastructure.

Notable in the mix, Williams earns as salary of $350,000 per month with other benefits.

Williams, has five CXC subjects with two GCE subjects listed among his qualifications. He also has an American Management Association Diploma  in General Management from the Business School in Georgetown.

Carberry takes home a gross salary of $250,000 with additional benefits.

He is charged with advising the Minister of State on all matters relating to proposals for constitutional reform.

His position is juxtaposed with that of the Steering Committee on constitutional Reform and the Office of the Prime Minister which has responsibility for constitutional reform.

Moreover, Carberry has no background in law but rather a Degree in Economic and a Master of Science Degree in Management and Administrative Science both from London based institutions.

London, at the Ministry of Public Infrastructure, has a salary of $600,000 per month along with additional benefits.