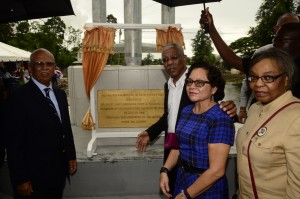 The southern entrance to the capital city of Georgetown at Agricola, East Bank Demerara is now adorned by a new 50th anniversary Independence Arch, compliments of local company Banks DIH.

Assembled at a cost of $20M, the arch rests close to 200ft in the air and is decorated with Guyana’s 50th Independence logo and the national flag. Banks DIH Chairman, Clifford Reis at the commissioning ceremony on Friday, noted the significance of the arch to Guyana’s Independence.

Essentially, the arch replaces another that was torn down to facilitate the expansion of the East Bank Demerara road in 2004. Reis said that the arch should serve as a “beacon of renewal and hope to the people of Agricola and East Bank district.”

President David Granger in his address made similar sentiments, expanding to say it is a beacon of prosperity for Guyana’s rural folk. He recalled Georgetown’s long pre-Independence history and the many name and physical changes the city underwent.

The President stated that the arch would also serve as an “arch is gateway to movement of urban renewal” noting the many persons that travel to Georgetown each year in search of a better life.

“Georgetown is becoming a green clean and safe city once again,” Mr Granger stated later adding “Georgetown must be an ordered city allowing for easy access…sidewalks, alleys and pavements must be unencumbered.” 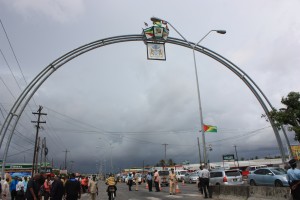 He said that Georgetown’s by-laws must be enforced vigorously to allow for less traffic congestion as “Georgetown means business and is country’s workshop.”

Public Infrastructure Minister, David Patterson for his part stated that it was fitting to let the public know just when they are entering the famous Garden City. However, this arch will serve more than practicality.

“Though it is not on the original site, this arch commemorates the same values that those men and women before us had celebrated: perseverance, hard work, and a bright future, and it is important that our people are reminded of what many fought and died for 50 years ago,” Patterson stated.

2016-05-20
Writer
Previous: King not rogue! Mayor unaware of injunction against demolition at Dreadshop
Next: CCJ dismisses a Guyana land appeal on the basis of fraud