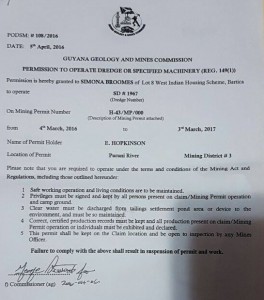 Even as Junior Natural Resources Minister, Simona Broomes fended off concerns about conflict of interest in the mining sector, information has surfaced showing that she applied for permission to conduct mining activity on someone else’s property while being a minister of that sector.

Demerara Waves Online News was able to independently confirm that veteran miner, Edward Hopkinson granted Broomes permission to mine on his property at Puruni. The application by Simona Broomes (National Identification Number 11383803) is dated March 4, 2016.

Efforts to contact Broomes proved futile, but Senior Minister of Natural Resources, Raphael Trotman said that was new information coming to hand and that he would have to check on it. “I am not aware but I would have to investigate,” he said. Preliminarily, though, he did not think that Broomes found herself in a conflict of interest situation. “I don’t see it as being a conflict if she is going to mine on somebody’s property. If it is that she is using her office to gain an advantage will be a conflict,” Trotman told Demerara Waves Online News.

He explained that much would have to whether a miner felt pressured to the point that he or she could not have said “no,” only then the likelihood of a conflict of interest would arise.

In defending the transfer of a dredge from herself to one of her children, she has said that it was not the transferal of a mining permit.  “All I have done is transfer a dredge that was in existence for decades it has nothing to do with a permit,” she stated.

President David Granger, on this week’s edition of Public Interest to be aired at the weekend, said the fact that her children owned the property did not give rise to a conflict of interest. “The functions she performed at the Ministry do not necessarily come into conflict with the fact that her children own that property. Minister of Natural Resources is an experienced Attorney and I’ve asked him for his views and I will be guided by his advice but at present I do not see any need to remove her,” Granger said.

The Guyanese leader has, however, said that if a situation of conflict arises Broomes would have to be shifted to another ministry or demit office.