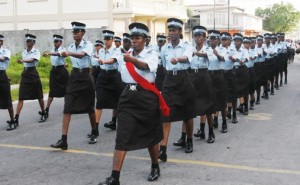 The Guyana Police Force is planning a grand display of its resources and capabilities on Saturday in observance of Police Day.

At a press conference on Wednesday, ‘A’ Division Commander Clifton Hicken made the announcement while providing details on what the public can expect. He said that the entire initiative was geared towards showcasing the Police Force.

The event will be held at the Jubilee ‘Durban’ Park.

“We recognize that many organisations are fielding some form of entertainment of expo for the jubilee celebrations and we felt that we don’t want to only provide security for these events but we want to sell the force in what we are doing,” said the Commander.

He further added, “We are going to realize what we call a police day showcasing the police force.”

The event, which commences at 15:00hrs, will see displays from several branches of the force including the SWAT and Tactical Service Units.

“We will use this opportunity to showcase our SWAT in action; they will be doing a hostage and rescue,” said Hicken.

This display will come just days after the force received a fleet of new vehicles from the government.

Handing over the new vehicles on Wednesday, Security Minister Khemraj Ramjattan said that it is important that the police force put measures in place to care for the new assets.

He said that the new vehicles form part of the 5-point plan adumbrated by the President David Granger administration. Negotiations are currently ongoing for another 28 vehicles to be given to the police force.