Industrial unrest for higher salaries looms at University of Guyana 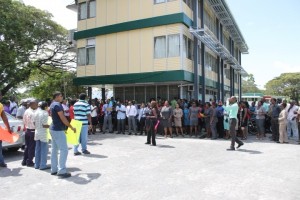 FLASH BACK: University of Guyana workers protesting in January, 2015 for increased wages and salaries. To date, the dispute remains unresolved.

Academic and non-academic staff of the University of Guyana on Wednesday threatened industrial action from Friday if the administration does not give into its demand for salary increases  and abort plans to pay already highly paid top officers a 10 percent hike.

The unions said they have warned UG’s administration and Council that if their demands are not met “some form of industrial action” could begin as early as Friday, May 20, 2016.

Demands by the unions include a 23% and 25% increase in salaries retroactive to January 2016 for academic and non-academic staff respectively along with all benefits submitted to the University’s administration on April 20, 2016 be paid in their May 2016 salaries.

UGSSA and UGWU say the University Council must respect its ruling on April 18, 2016 to  exclude from the across the board increases,  staff specially recruited and/or retained at market rates and that they be offered salary adjustments in keeping with inflation rates.

Among the key demands is for the Council to rescind its decision to pay statutory officers- two deputy vice chancellors, the registrar and the bursar- a 10% increase in salaries retroactive to January 2015 until it can offer adequate justification for such action. “Incredibly, this very administration which claimed it had no monies to pay miniscule benefits such as 10 bursaries for our children who perform with distinction at national exams found monies (over 8 million) to increase the salaries of statutory officers who had just joined the university – one mere 8 months ago and all others within the last two years and some whose take home pay amounts to approximately $1 million dollars per month,” the unions added.

If the University of Guyana’s administration and Council go ahead and pay the 10% increase to the statutory officers, the unions say they will “reassert their previous demand of a 60% increase in salaries retroactive to January 2016 and all submitted demands contained in our Memorandum of Demands dated February 16, 2015.”

No official of the University’s administration could be contacted immediately, but the unions said they have been informed by the administration that increased wages and salaries were not affordable although an increased subvention totaling GYD$500 million had been received from the Ministry of Finance. “It has insisted that the UG has no money to pay for anything apart from what it is currently paying and that any increase in salary and/or benefits must come from the increased subvention the University received,” said the UGWU and UGSSA.