Digicel launches ‘Phantom of the Arts’ Costume for Jubilee Parade 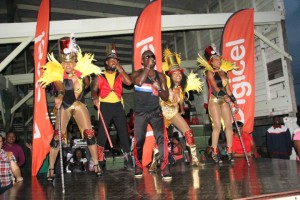 Digicel Guyana is the first company to publicly launch it’s costume designs for Guyana’s 50th Jubilee Celebrations despite the event being a mere eight days away.

On Wednesday afternoon, the company used the Bourda ground as it’s launching venue among persons that were taking part in the Digicel sponsored Fit for 50 Challenge.

The costumes will be free of cost for Digicel customers with special conditions attached.

A statement released by the company noted that the humble masquerade band is an integral part of Mashramani celebrations.

“masqueraders play an important role in Guyanese culture and digicel believes that it should be given prominence by highlighting its importance at the 50th Anniversary of our independence,” the statement noted.

For the costumes, the male individual will be representing the “mad cow.” Tthis represents fear and acrobatic agility. He is also surrounded by the “Long Lady” on her stilts. Historically, the long lady is one of the few features that survived to contemporary times and “Bam Bam Sally” the woman known for her largely developed gluteus maximus muscles and accompanied by two prancers. 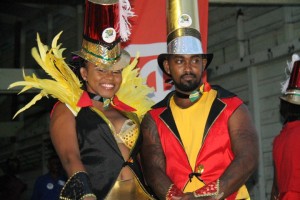 The designs have been described as classy

The women will be dressed in sexy yet sophisticated scissors tale impersonating type jackets costumes with an inner two piece, also wearing feathered bag pak, and top hats with feathers.

The men will be displaying similar type jackets with bowties made out of the national colours.

Designer Olympia Small Sonaram said that the outfits were themed the Phantom of the Arts for a specific reason.

“For me I wanted to focus on the arts in Guyana and it seems what we had in the past it is no more and I am hoping to portray it in my costume so we can bring it back…it was all about the arts,” said Sonaram.

Asked to describe her designs she stated that they are “classy.”