Minutes before declaring GuyExpo 2016 officially open President David Granger spoke of his vision to see Guyana revolutionized as a green economy with widespread development in a sustainable manner.

President Granger told the multitude of local businesses at the expo that his administration would be providing incentives for private sector entities that chose to invest in this green economy.

“Guyana must move on to a green wave. Green jobs are the next wave of job creation,” said Mr Granger later adding “Guyana needs a green development strategy and this is my task, this is my mission.”

He said that such an advent would be necessary to wean countries like Guyana off of its addiction to fossil fuels.

“So when you come next year the Minister of Business would not have a generator going in the background,” said President Granger adding that “a green economy is necessary to ensure the sustainable management of our natural resources.” 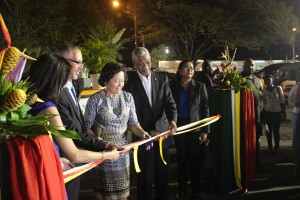 The President spoke of plans of his administration to invest heavily in alternative energy forms over the next five years. These would include wind, solar, and hydro energy.

“The Government of Guyana must lead the way forward in transitioning towards greater renewable energy use….every hospital every school….must convert to using” green energy, the President declared.

Mr Granger also committed to placing another two million hectares of Guyana’s land under conservation making it clear that every administrative region in Guyana must have its own protected area be it wetlands or Savannahs.

“We want to protect our flora and fauna so that our grandchildren can see the good things we inherited from our grandparents,” stated the President.