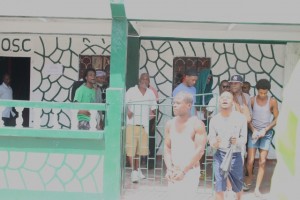 FLASH BACK: Several prisoners leaving the Guyana Prison’s Sports Club after detailing their grievances to Public Security Minister, Khemraj Ramjattan and Minister of State, Joseph Harmon after 17 inmates were burnt to death during the country’s worst prison riot.

Washington, D.C. –   The Inter-American Commission on Human Rights (IACHR) condemns the deaths of inmates at the Camp Street prison located in Georgetown, Guyana. The IACHR calls on the State to ensure that the ongoing investigations be conducted with due diligence and without delays, and that urgent measures be adopted to prevent similar incidents from occurring again.

Based on information available to the public, seventeen inmates died and seven were injured as a consequence of a fire at the prison facility on March 3, 2016. According to the national press, the incidents took place amidst a protest by the inmates against overcrowding, delays for prisoners awaiting trial, and other living conditions in the prison.

According to public declarations by Public Security Minister Khemraj Ramjattan and State Minister Joseph Harmon, a meeting was held March 4, 2016, and a truce was reached between inmates and authorities, following which inmates agreed to cease disturbances in exchange for the improvement of their basic living conditions. According to available information, the government has also set up a Commission of Inquiry, independent from the police’s investigation, in order to clarify what occurred during these riots, and to issue recommendations.

According to the press, the inmates gave testimony before the Commission of Inquiry saying the fires began after a raid by police guards in the inmates’ cells. They also declared that when the fire began, the door to their prison block was locked. According to their testimonies, inmates called for the door to be opened, tried to break down a wall leading to another division in the prison, and attempted to douse the fire themselves, but there was no water coming to the facility. Inmates claimed than rather than being assisted, canisters of tear gas were thrown into the burning prison block, forcing them to the ground and impeding them from escaping. Press reports also indicate that when he gave testimony before the Commission on Inquiry, the Deputy Director of the Guyana Prison Service, Gladwin Samuels, denied that he had issued an order for the prisoners to be locked inside the block that was on fire, and he said he instructed a worker to utilize a power cutter to get the lock on the door cut, but the heat was too much to operate in.

The IACHR also notes that what happened in the Camp Street Prison took place in a situation of overcrowding. Public information indicates that the prison was built to accommodate approximately 700 inmates, but the official in charge of the prison, Kevin Pilgrim, publicly declared that there were 1,014 persons housed there at the time of the fire. It is also reported that pretrial detention is largely resorted to and that inmates often are kept waiting for years prior to their cases being heard. In this context, the Inter-American Commission urgently calls on the State of Guyana to take steps to reduce overcrowding and the use of pretrial detention, through the implementation of alternative measures. The use of precautionary measures other than pretrial detention is consistent with the exceptional nature of pretrial detention and with the right to presumption of innocence. Moreover, the use of alternative measures tends to be sustainable and effective as part of a comprehensive strategy to address prison overcrowding.

The IACHR reiterates that States hold a special position as guarantors of the rights of persons deprived of liberty. Consequently, confinement entails a specific and essential commitment of States to ensure the lives and safety of inmates. This “duty to ensure” means that States must take all necessary measures to prevent situations of risk, such as the situation arising in this instance, from seriously jeopardizing the fundamental rights of inmates. Along these lines, States have the obligation to ensure that prisons have adequate, safe structures and the appropriate measures, action plans, and sufficient, trained staff in place to maintain security in its prisons and to handle emergency situations, such as fires. The IACHR believes that prison overcrowding not only constitutes in itself a form of cruel, inhuman, and degrading treatment, but is a factor that jeopardizes the life and personal integrity of those who are incarcerated in a particular facility. Thus is it imperative for the national authorities to take all measures that may be necessary to ensure that prisons do not hold more inmates than they are equipped to house based on their real capacity.

A principal, autonomous body of the OAS, the IACHR derives its mandate from the OAS Charter and the American Convention on Human Rights. The Inter-American Commission has a mandate to promote respect for human rights in the region and acts as a consultative body to the OAS in this area. The Commission is composed of seven independent members who are elected in an individual capacity by the OAS General Assembly and who do not represent their countries of origin or residence.