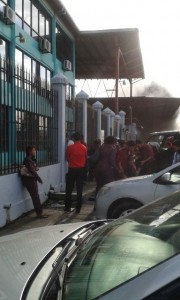 Several employees of Gafoors Complex outside as flames engulfed the building.

Georgetown Public Hospital Corporation (GPHC) sources said one of the firemen was admitted for further treatment while the others were treated, granted sick leave and sent away.

Gentle said their injuries were “not life-threatening” and they sustained “bumps and bruises.” Gentle said while there were no fractures, the fire fighters were “shaken up” and conscious.

The Fire Chief told Demerara Waves Online News that one of the firemen inhaled toxic fumes.

He said there were two collapses, one at about 7 PM and the other at about 10 PM.

Meanwhile, hundreds of employees were Tuesday morning trying to ascertain whether they would be laid off and have to search for new jobs at a time of a slothful economy.

Prior to the fire, Gafoor’s itself had begun complaining about slow business due to the economic downturn that dated back to 2014-2015, partly due to a slump in commodity prices and political uncertainty.