“I was not lobbied” – Pres Granger as Ogle Airport renamed 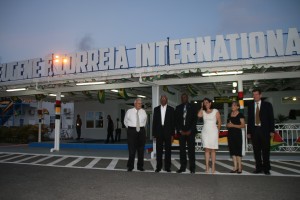 The move which has been in the making since 2015, has not found favor with approximately 9 of the operators at the Airport, who have raised stern objections.

They said that the move would be bad for business since the Airport being an entity of national interest would not be biased in favour of one particular operator and the company with the largest shares in the Airport.

However, when President Granger addressed the gathering at the opening ceremony, he was pellucid that his actions were merely to recognize the contributions of one of Guyana’s first aviators.

“I was not coerced, I was not lobbied. It was simply to recognize the character of the man,” he stated referring to Eugene Correia.

He made it clear that it was not a show of “dictatorship” on the part of his Administration. The President justified his decision giving a long history of the things accomplished by the now dead Correia.

Meanwhile, Public Infrastructure Minister David Patterson said Correia was a son of the soil whose record we should be proud of. 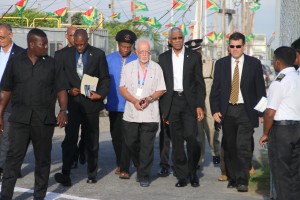 He stated that the concerns raised by those opposing the renaming will be looked at during a review of the airport’s operations.

“Operators who oppose today’s renaming have complained that this act will give an unfair advantage to a specific operator. Their concerns cannot be dismissed as something without any merit, therefore this will also be addressed during our review process,” the Minister emphasized.

Chairman of the Ogle Airport Michael Correia did not have any kind words for the operators that opposed the renaming lashing out at them extensively in his bid to ‘set the record straight.’

He said that “self-interest, greed and jealousy” seemed to be the order of the day relative to the renaming.

Correia stated that the division over the renaming is being driven by “some people that I believe misuse their influence. I recognize that this unfortunate division, much part of the environment, which exists in our society today. Self-interest greed and jealousy, rule the day with not enough attention being paid to what is in our national interest.”

Previous: Guyana links surface in Panama Papers
Next: 2:00AM Party Done curfew being reviewed for some Jubilee events