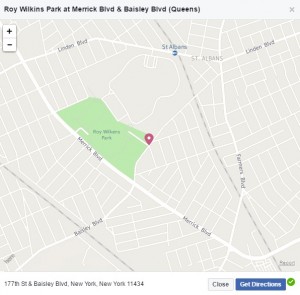 As part of efforts aimed at knitting the Guyanese heritage into the lives of the diaspora living in the United States by creating the atmosphere and environment conducive for Guyanese to meet and interact, a “Guyana Heritage Festival”; which goes hand-in-hand with the celebrations for Guyana’s 50th Independence Anniversary,
is being planned.

Under the theme “Land of Our Roots and Culture”, the Guyana Heritage Day seeks to provide an opportunity for those who are unable to travel to Guyana to celebrate this momentous occasion to do so in New York City.

The event is being organised by Wee Radio Inc.

The Festival is expected to attract over 10,000 persons of all ages, from the Caribbean, West Indies, East Asians and South American communities as these communities join the Guyanese diaspora in a day of culture, music, food and overall family fun.

The event is slated for May 21, 2016 at the Roy Wilkins Park on Baisley Boulevard in Queens, New York and is a day of culture, food and entertainment. The event aims to bring the true flavor of Guyanese celebrations to its diaspora and by extension the populace of the United States of America (USA).

The event promises a panorama of music, dance, food, games, interaction and fun for which Guyanese from all walks of life will join with their Caribbean brothers and sisters.

The highlights of the event will be dances and cultural shows which will extend from 2:00 p.m. to 7:00 p.m. and will provide unforgettable entertainment for all attending.

The cast’s line up consists of primarily Guyanese talent along with supporting talent from other Caribbean islands.

The event will be MC’ed by one of the Caribbean’s most talented announcer, Bob “Spiceman” Frederick and some of the main highlights of the cast are the legendary Calypso Rose, special appearance by the Mighty Sparrow, Geeta Bisram, the Angels Caribbean Band, Devindra Pooran, Fiona Singh, Wata Flo, Joyce Ormilla Harris, Dheeraj Gayaram and the Gungroo Dancers, Guyana Folk Dancers, Rudy Bishop’s Chronicle Atlantic Steel Band, Clif Joseph, and the Wee radio DJ’s.

Additionally, there will be a number of supporting activities including, but not limited to, games, clown, face painting, bouncy castle, cartoon characters among other side attractions.

In an invited comment, President and CEO of Wee Radio Inc. Mr. Marlon Seenarine who is of Guyanese heritage said that “this event is one of many such events which have been put together to strengthen and solidify the bonds between the Guyanese living abroad with their culture and heritage from back home. From the cook-out competitions to the lime-and-spoon races, this event is planned with all Guyanese in mind and will be an annual event.”

Some of the main sponsors of the event are MGN Funding, Wee Radio Inc., Angels Entertainment Inc., GTT, Xoom International Online Remittances and many more.

2016-05-08
Denis Chabrol
Previous: Phone rate competition heats up
Next: A draft May 26 speech for His Excellency