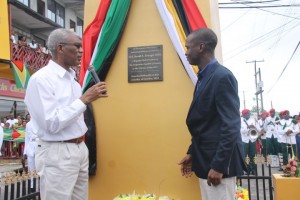 President David Granger and Bartica Mayor, Gifford Marshall shortly after they unveiled a plaque to officially declare Bartica a town.

Guyana’s President David Granger on Saturday announced a target of ensuring that every government building is powered by renewable energy over the next four years as part of the country’s drive to eventually eliminate its addiction to fossil fuels.

“I do believe the private sector will come along with us but my short-term objective is to make the government green and set the model,” he said in response to questions posed by Demerara Waves Online News.

Guyana on April 22, 2016 pledged in the Paris Agreement on Climate Change to reduce greenhouse gases and by extension global warming by 1.5 degrees Celsius.

Granger first made the announcement at the official declaration of Bartica as one of Guyana’s newest towns, a dream that dates back to 1887 when Britain had passed an ordnance to make that district a town.  “Every school, every hospital, every police station, every government building has to move quickly over the next four years to adopting sustainable sources of energy- renewable energy. No more addiction to gasoline and dieseline. We are moving to clean energy,” he said. 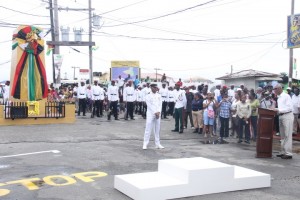 President David Granger addressing a gathering at Bartica to officially declare there a town.

Now, Granger said Bartica, the capital of Region 7- Upper Cuyuni-Mazaruni, must lead the way as a model town in the areas of solar and wind energy, solid waste management and recycling. “Bartica is going to become a laboratory for Guyana’s green economy,” he said, adding that the town should be a brilliant example to other towns and regions on how to supply non-fossil energy. “Bartica must become the motor to transform Guyana on to a platform of a sustainable development,” he said.

Days after announcing that he was going to lobby United States (US) stakeholders at the US-Caribbean-Central American Energy Summit that was held in Washington DC from May 3 to 4, 2016 for cash and technical assistance to help Guyana transition to a renewable energy economy, President David Granger said he returned home without funding but more motivation to pursue a green economy. ““The lesson I came away from Washington with is what needs to be done. I didn’t come back with a bagful of money, I didn’t come back with any blueprint but what I know is that Guyana has been addicted to oil; we have to get rid of that addiction and also the LCDS (Low Carbon Development Strategy) we have embraced for so long is inadequate to provide the type of sustainable resource that we need to develop,” he said.

The President said the best lesson from the Energy Summit was the need for Guyana to “do a lot more a lot more quickly to catch up with some other states in the region.”

Guyana, he said, could tap into several sources of renewable energy:   abundant sunshine, an estimated 100 hydro-power sites, and biomass from rice and sugar. “I think we are better placed than some of the other Caribbean countries but we have to do much,” he said.

Guyana’s annual fossil fuel bill is estimated at US$200 million.

The President’s address and his unveiling of a plaque with Mayor Gifford Marshall to officially declare Bartica a town was preceded by a parade of soldiers and police.

2016-05-07
Denis Chabrol
Previous: Digicel to invest up to US$40M more as 4G service rolls out
Next: Ramjattan says no need to resign due to violent crimes