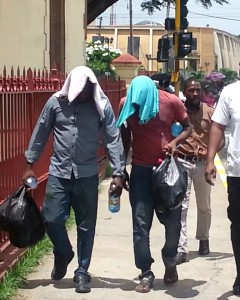 Police said that, being armed with guns, they robbed Daniel Ronald and Alpha Ramadar of more than GYD$8.5 million shortly before 4 AM on April 29, 2016 at the casino located at Providence, East Coast Demerara.

Prosecutor Deniro James applied for the case to be trialed summarily, while adding that the case file was incomplete.

The court was told that attempted murder charges could eventually be laid because a policeman was shot to his abdomen by one of the bandits. In all five persons -Eon Garraway, James Gregory, Orlando Knights and Udairan Sookraj  and Police Lance Corporal Andrew Richardson- were injured during the pre-dawn attack.

Prosecutor Jones also informed the court that Griffith and Stewart have pending court case for a similar charge before City Magistrate, Fabayo Azore.

The prosecution opposed bail because of the seriousness of the offence, firearms were used and the policeman remains hospitalized.

Griffith was caught while hiding in a Maintenance Room at the hotel with a gun in his possession,  security guard Blackman was arrested after investigators learnt that he was the mastermind  and Stewart was nabbed days after with almost GYD$1 million in wet cash in his possession.