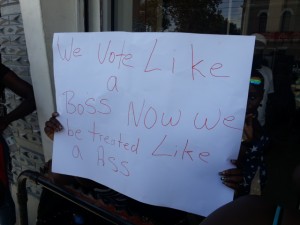 “When the previous Town Clerk was in office and wanted to remove the vendors, this current Town Clerk and Mayor were fighting against it. Now they are in power they are doing the very thing they condemned not so long ago. It is their approach that we are strongly against,” Red Thread said.

Red Thread called on the Chase-Green, Deputy Mayor Sherod Duncan, King, the  Councilors, and the Guyana government to “immediately  ensure that the vendors regain their livelihoods with compensation for their losses.”

The non-governmental organisation said if an unclean environment is a major reason for the vendors removal, then anti-litter monitoring personnel should have been deployed. On the other hand, if vending is illegal, Red Thread said adequate provision should have been put in place to accommodate the vendors who are mainly poor female and male single parents who are “scrambling honestly to earn a living to ensure the survival of themselves and families.”

The City Council has been preparing a plot of land at Hadfield and Lombard Streets owned by a city businessman to accommodate the vendors for the next three months after which they would have to remove. 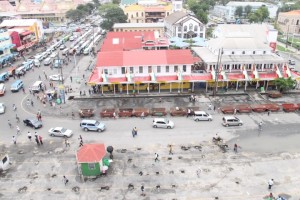 The organisation questioned whether the displacement of hundreds of persons from their livelihoods that allow them to send their children to school, pay bills, rent, repay loans to lenders like the Institute of Private Enterprise Development (IPED) and other expenses   amount to a “good life” that they had been promised in the run up to the May 11, 2015 general and regional elections. “This government promised “A BETTER LIFE FOR ALL” . Is taking bread out of poor peoples’ mouth a better life?”

A small group of vendors Thursday afternoon picketed outside Parliament  Building while the National Assembly was in session. Placards held up by the group of mainly women included “Royston King, Damn Blasted Liar,” and “We voted like a boss, now we be treated like an ass,” and “We vote for you, you must stand for us. We have to live.”

The City Councillors plans to hold a meeting with vendors Friday morning at City Hall.

There have been mixed reactions about the clearance of the Stabroek Market area, with many passersby praising the move because the area is clean and there is a reduce risk of being robbed. Large amounts of food boxes, bottles, other types of solid waste and silt have been removed from the drains around Demico House.

The Routes 41, 45 and 46 buses as well as vendors have been removed from outside Stabroek Market.

However, bread and phone card vendors crawl out after sunset to eke out a living.