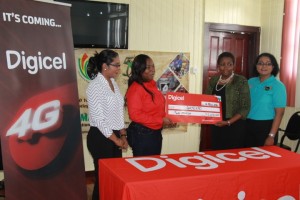 Digicel (Guyana) Limited has donated GYD$2 million to assist in financing GuyExpo 2016, at a time when there has been a cut in the budget for the annual trade fair.

The donation by the mobile phone carrier includes its rental of a booth at the Sophia Exhibition Centre where it will exhibit its products and services during the event that runs from May 12 to 15, 2016.

GuyExpo Coordinator, Tameca Sukhdeo-Singh said running off the trade fair usually costs more than GYD$100 million but “this year we have had serious cuts,” resulting in the budget being about GYD$70 million.

Chairperson of GuyExpo 2016, Dawn Holder-Alert  said the trade fair’s committee was tasked with finding the money.

Sukhdeo-Singh said organisers were aware of competing demands on the business community as GuyExpo coincides with 50th Independence Anniversary celebrations. “Usually we don’t have problems accessing sponsorship. Persons are always willing to come and sponsor but because there are so many events, sponsors are suffering from sponsorship fatigue because everybody is knocking at their doors and so the amount of money we usually get from sponsorship to help us to offset our event, we are not getting that so we have had to do some budget cuts,” she added. 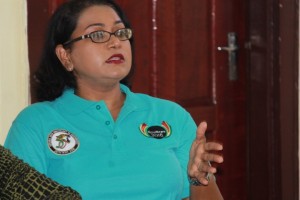 GuyExpo officials forecast that its profit would be reduced by at least 35 percent, even as efforts are underway to ensure that suppliers and service providers are paid.

The GuyExpo official forecasts a reduction in ticket sales because Guyanese would be attending other events. “We are trying to see how we need to buffer ourselves so at least we break-even,” she said. One of the strategies, she said, to boost attendance is a give-away of 10 gate prizes each night. The prizes include furniture, televisions, IPads and hampers.

Latest figures show that more than 300 of the 400 booths have been already rented to exhibitors.

The event will include four workshops to assist small, medium and micro-businesses in product packaging and marketing, social media marketing and website development and crafting a business plan to help access financing. “We thought it’s critical to help our businesses and guide them on how to prepare a business plan so that when they go to access finance they will be able to have that plan to guide them in their development and also to show that this is their financial plan,” said Sukhdeo-Singh.