Flooding averted in section of Queenstown after culverts cleared 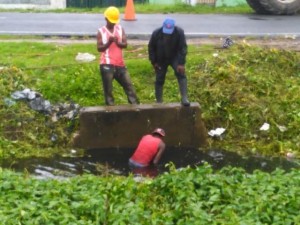 Serious flooding was avoided after the Ministry of Public Infrastructure and City Hall took action to clear two culverts in Queenstown, Georgetown on Monday (May 2, 2016) morning.

Community Coordinator Neilson McKenzie was quoted by the Government Information Agency (GINA) as saying that the two culverts, which drained the areas surrounding to the Demerara Cricket Club Ground and Herdmanston Lodge, were found to be blocked with debris including discarded builder’s waste.

With assistance from City Hall, the culverts were cleared and water receded quickly into the Lamaha Street Canal, McKenzie explained.

The ministry said the existing drainage network for the city could only accommodate rainfall of no more than 2.5 inches in a 24 hour period. “Should rainfall exceed this amount, there is expected to be minimal flooding and the ministry is seeking to ensure that the waters recede in the shortest possible period, tide permitting,” the Ministry of Public Infrastructure said in a statement.

The work in Queenstown, according to the Ministry of Public Infrastructure, is its mandate to respond quickly to ensure that communities are adequately drained, particularly in light of the prevailing inclement weather conditions.

The Ministry of Public Infrastructure has noted that recent excess rainfall has, regrettably, resulted in flooding in some parts of our capital city and outlying areas.

“The ministry is pleased that several areas of Georgetown, which suffered from constant flooding during previous rainy seasons, are now draining off without hindrance.”

The ministry noted, however, that parts North and South Ruimveldt were flooded

Therefore, the ministry is working assiduously, in collaboration with other agencies, to ensure that all blockages are cleared as quickly as possible. The ministry seeks the patience and cooperation of those citizens affected in the flooded areas.

The Ministry of Public Infrastructure thanks the residents of Georgetown for their patience, understanding and cooperation at this time of inconvenience.