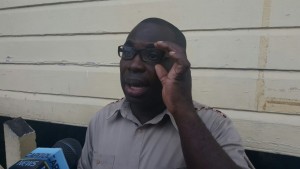 People’s Progressive Party (PPP) activist Kwame McCoy has once again been hauled before the courts; this time over allegations of assault against political activist Mark Benschop.

McCoy on Wednesday appeared before the Providence Magistrate’s Court where he was made to answer charges of assault, damage to property, and larceny.

He pleaded not guilty to the charges when they were read to him by Magistrate Lerone Bailey and was was granted a total of $275,000 bail.

McCoy is scheduled to return to court on May 18.

The charges stem from an incident on March 5, 2011, when Benschop was allegedly attacked outside McCoy’s residence in Diamond, East Bank Demerara.

Benschop’s vehicle which was left outside McCoy’s home after he fled the area; was damaged to a considerable extent with all of the windows and windscreens broken. Several items were also stolen from the vehicle.

The PPP activist is claiming that he is being witch-hunted following the latest string of charges that have been laid against him.

“Over the last few months, I have had to endure several days of imprisonment; I spent numerous hours at police stations; I gave several statements to the police; I have been asked innumerable questions; attempts have been made to frame me for murder; I have been charged with an assault which allegedly took place over five (5) years ago; although assault is one of the most trivial charges known to criminal law, I have been taken to court in chain,” McCoy said in a statement released on Wednesday morning.

He said that it is clear he is being persecuted because of his “journalistic and political activism” adding that the criminal justice system will continue to be used and misused as a political weapon against persons.

McCoy said he will endure and is confident that his innocence will be vindicated in the end.