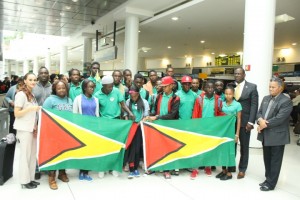 Despite a lack of support by the Guyana government, a team of Guyanese athletes on Wednesday journeyed to the United States (US) to participate in the Penn Relay after Fly Jamaica Airlines and a Jamaican organisation bailed them out of their woes.

The Penn Relay festival , which is the oldest and largest track and field competition in the US, is scheduled for April 28 to 30, 2016.

Chief Executive Officer of Roraima Group of Companies, Gerry Gouveia pledged US$1,000 towards the contingent’s stay in the US.

Team Manager Keisa Burnette, who is leading the 18-member contingent from the Fort Wellington Secondary School, West Coast Berbice said her group was happy to eventually make it to the US and promised that “we are going to make our best of it.” As a morale booster, the team won all the relay events at last Friday’s Relay Festival at the Leonora Ground.

US-based former Guyanese athlete Tanya Barry and Coach, Mark Webster, who were in Guyana last year recognised the potential of the youths and spearheaded plans for the team to participate in the prestigious American track event. “We all know that the Jamaicans are number one. Right now, they are ranking up there and to come up here and to run with some of the best high schoolers in the Nation, I think is different from when you are running in Guyana,” 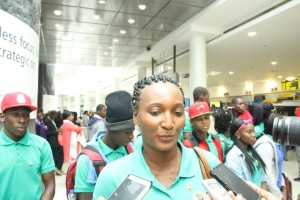 Head of the Caribbean Guyana Institute of Democracy, Rickford Burke added “the mere fact that the kids did not receice a phone call from the Ministry of Culture and the Jamaicans have to take care of these kids speaks volumes where we have to go as a country.”

Burnette detailed the problems that the athletes encountered in seeking assistance from the Ministry of Education, Culture, Youth and Sport. “When we reached out to them, there was no help,” she told Guyanese reporters at the John F. Kennedy International Airport.  She recalled that when the more than GYD$4 million budget was submitted, Guyanese authorities had promised to assist with the payment for the US visas but recanted one day before the interview date of April 6, 2015, saying that they could no longer have assisted because the school received a private letter from Pennsylvania instead of through the Department of Sports. “It was a hassle. We had to hurry up and get some money to get these kids their visas,” Burnette said.  After the visas were granted, she said they returned to the Department of Sport for promised assistance with the airfares backed by an endorsement letter from the Athletics Association of Guyana but only received help for two of the 18 participants. Eventually, she said, the government refused to provide the two tickets 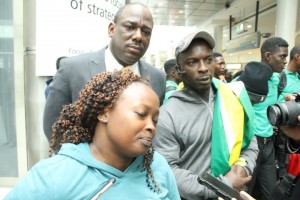 Head of the Caribbean Guyana Institute of Democracy, Rickford Burke, and US-based former Guyanese athlete Tanya Barry and Coach, Mark Webster. Barry and Webster played major roles in preparing the team of athletes from Fort Wellington Secondary School to participate in the US’ Penn Relay.

Barry, who is a youth officer at the New York Police Department (NYPD), not only teamed up with Coach Webster but also provided at least US$5,000 in contribution towards the air fares to ensure that Guyanese participate in the event. “Every year, we go to Penn Relays we don’t have a team of Guyanese nationals to cheer on so we both used to run track at high school in different teams so we came up this year with this. We said we wanted to put together a high school team from there to come up so that was my dream and my focus,” said Barry who resided in Plaisance and Albouystown before she migrated to the US. Webster and Barry credited Team Jamaica with providing hotel, meals and transportation in Pennsylvania.

Barry said the Guyanese athletes would be exposed to a wide variety of coaches from several colleges who could also offer scholarships. “Some of these kids have dreams- they want to become an Olympic runner to represent their country. Further, they are able to see what it’s like to compete at a different level,” she said. “It’s just not experience but it opens up a lot for education scholarships and also let people know that Guyanese have talent,” she said.

Referring to the absence of support by the Guyana government, she urged authorities in Georgetown to do the right thing for Guyanese youths. “I think what they need to understand is that at the end of the day it is about children and our future. If we do not stop to invest in our youths, then where will we be? We will be stuck in the same place constantly and we will be stagnant so I think that we need to understand that whatever these kids’ dreams are, let us try to propel them, let us try and invest in our youths and it means that we have an investment in the future.