‘How can you save a life already lost?’ – Prison Service Officer asks COI 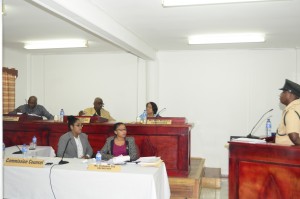 Cadet Prison Officer and the Head of the task force that was activated to deal with rioting prisoners on March 3 had some grueling questions of his own when he appeared before the Commission of Inquiry into the Camp Street Prison disturbances on Friday.

Udistair Holligan, a key respondent during the riots, recounted the fear and intimidation that was associated with the riots at the prison.

“When I am sitting in my quiet moments, thinking back to that date I can still hear the screaming, the threats…it was as if you know, you did your job to the best but you didn’t do it good enough to assist on that day,” Holligan told the Commissioners.

The prison officer with eight years of service under his belt said, that what went down on the day that 17 prisoners died is something that still haunts him since it is hard to cope with.

“It’s kind of hard to cope with what on that day…if this thing goes to this level again, how can you assist somebody, how can you preserve a life that is already lost,” he questioned.

He recalled shouting instructions for prisoners to escape the blaze via another section of the prison but not seeing any movement through the thick black smoke.

Even after all of this, Holligan said that some inmates still blame him and other officers for the deaths of the prisoners and often time hurl lewd threats in his direction.

“Inmates basically send threats at me…It was if I was at fault – that I lit the fire and got them burnt…I couldn’t even come to grips that this had even happened,” he stated.