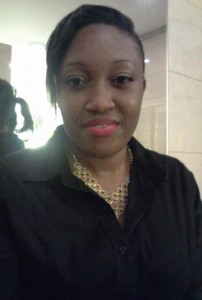 A man has confessed to having been involved in the killing of his child’s mother and dumping her body in a canal at Cummings Lodge, East Coast Demerara, a top police investigator said Thursday afternoon.

Investigators, he said, were now looking for a second person who could assist them in their probe into the killing of 25-year old Simone Hackett. “Investigators are making earnest efforts to locate another individual to assist us with our investigation,”  police said.

A senior crime sleuth told Demerara Waves Online News that detectives accompanied the man to the area where Hackett’s decomposing body was found Tuesday morning , April 19, 2016. Other sources said the handcuffed man was at the scene with police at about 4 O’clock Thursday.

In confessing to his involvement in the killing, the man told police that he committed the act because Hackett was unfaithful to him. 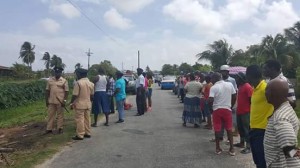 Police and curious onlookers at the scene where the body of a woman was removed from a canal at Cummings Lodge, East Coast Demerara.

someone at the Mahdia Bus Park, Hadfield Street, Stabroek, Georgetown.

Relatives said she had named the person as “Dexter” from whom she was expected to collect the package which was being sent by her son’s father for the boy’s birthday.

She reportedly told a relative that she had been asked to stand on the Railway Embankment by Dexter because he had changed his route.