Cocaine in plywood weighed at 48 kilos; valued at millions 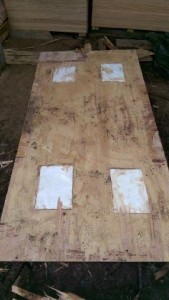 Customs and Anti-Narcotics Unit (CANU) Head James Singh has confirmed that a popular sawmill owner, one of his employees and a broker are still in custody following a huge drug bust on Thursday.

Singh confirmed that authorities intercepted 48 kilograms of cocaine with an estimated US street value of US$35,000 per kilogram. That would amount to millions of Guyana dollars in cocaine being seized.

He said that while there have been non confessions from the trio, the authorities are still probing the case.

The Head of CANU said this latest seizure demonstrates the strong working relationship between the Guyana Revenue Authority and its various entities as well as CANU and the Guyana Police Force . “Closer collaboration and intelligence sharing continue to be one of the successful strategies in the fight against drug trafficking and money laundering,” he said.

Singh added that the presence of the United States Drug Enforcement Agency in Guyana “gives us more access to information sharing and feedback.”