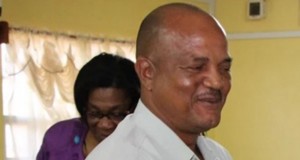 A petition containing 1,200 signatures calling for the Region Nine Executive Officer, Karl Parker has been dispatched to President David Granger prompting the intervention of the Guyanese leader and Parker’s stern denial of the allegations.

“I’ll say this, however, that none of it is true. I think is just a political ploy to get me out of the way but if you notice I have been also branded a political activist,” Parker told Demerara Waves Online News.

Except for a broad denial, Parker declined to respond to any of the alleged infractions until after he responds to the Minister of Communities, Ronald Bulkan.

The REO said he was not affected by the allegations- (some of which are potentially libelous and are not being reproduced). Others include his alleged refusal to accept appointments by the Public Service Commission of both new recruits and promotions, alleged dismissal of three Amerindian staff members of the Regional Democratic Council due to personal and political differences, preventing staff from being in the company of the Regional Chairman and Vice Chairman, meddling in the affairs of the Amerindian Village Councils such as the holding of unauthorized meetings in villages and ordering that Village Councils report to him, his overriding of all decisions made by the Regional Democratic Council, failure to provide requisite financial and status reports and minutes of the Regional Tender Board, refusal to reimburse fuel costs to Village Councils for the use of their vehicles when transporting students and patients to and from the secondary school dormitories and hospital and alleged political victimization of mainly Amerindian job applicants- joining APNU, they said, being a pre-requisite.

“Mr. President, we the people of Region #9 humbly request your urgent intervention. Our people have been suffering for months and the situation has become unbearable. We can now only depend on your good office to ensure that the Ministry of Communities corrects this anomaly and violation of our rights,” states the petition signed firstly by Berlinda Duncan “on behalf of the aforementioned people of Region 9.”

After seeing the petition and one of the signatures, Parker said he sought the intervention of the Lethem Police but he could not say whether he believed that the woman, Berlinda Duncan, might have committed a criminal offence that requited police involvement. He said the police related that the allegations were serious and they wanted to speak with Duncan, a deputy Toshao. “I know that she does not have the capacity to write that letter. That letter was written right here in this (RDC Region Nine) office,” he said.

The REO said he was aware of the petition before it reached the President and he was told that persons were asked to sign a paper without reading.

The REO said since the petition dated April 11, 2016, the President has called him saying that he hoped that the allegations are not factual. Parker said he believed that the President might order a probe. “His Excellency also called this (Friday) morning and he did say that he hoped none of it is true…The authors of that letter will have their chance to prove those allegations because I am certain will order an investigation,” he said.

The Guyana Empowered Peoples’ Action Network (GEPAN) and The Amerindian Action Movement of Guyana (TAAMOG) have since written to Minister of Communities expressing solidarity with the petitioners. “Honourable Minister, GEPAN and TAAMOG stand strong with the residents of Region 9 in support of this petition. We are calling on your office to intervene in granting the people their request. The people of Region 9 have been complaining about the REO’s performance for now almost a year and their plight should no longer go unanswered,” the organisations said in their joint letter to Bulkan.

The Minister of Communities confirmed to Demerara Waves Online News that the REO has been asked to respond to the allegations. Bulkan said that from all accounts several of the “purported” signatures were bogus  but nevertheless a probe would be launched. He declined to say whether the probe would include the dispatch of a delegation to the villages to hear from residents directly. “I have already gotten information from independent sources. When you look at the signatures you can see similarities between the names of the persons that were handwritten and a similarity or resemblance with its signatures so it sort of casts doubt on the process and I have also learnt that a lot of persons were actually unaware of what they were signing to,” he said.