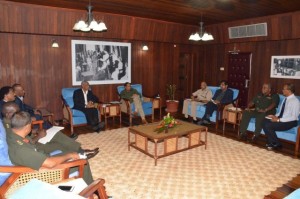 President David Granger on Thursday convened an emergency meeting of the National Security Committee at the Ministry of the Presidency to discuss recent developments at the Camp Street prison, where only two out of the 15 prison officers scheduled for the day shift, reported for duty this morning.

The Ministry of the Presidency said Director of Prisons (Ag), Mr. Carl Graham has since sought reinforcements from the Timehri and Lusignan Prisons and from the administration division at the Camp Street Prison in an effort to keep the situation under control.

The committee was informed that since the deadly prison riot in early March, inmates have become bolder and much more aggressive; displaying weapons and acting menacingly towards prison officers. As such, the officers have become fearful to carry out their duties. This is suspected to be the reason behind 13 officers submitting seven-day sick leave certificates.

The committee was also informed that there has been an increase in cases of marijuana being thrown over the prison fences and wardens are afraid of being harmed by prisoners, who are under the influence of the drug. In light of this, President Granger has ordered that the outer cordons of the prison be extended to include D’urban, John and Bent Streets, which will be blocked off to the public except for persons residing within those areas, as is done on Camp Street.

2016-04-14
Denis Chabrol
Previous: Harmon denies earmarking of hangar to BK International; confirms board shelved earlier decision due to expansion
Next: Statement by Minister of State, Hon. Joseph Harmon on request for delay of action against Bai Shan Lin by GRA