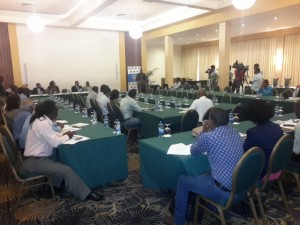 Guyana and the Caribbean Development Bank (CDB) on Wednesday launched a US$30 million sea defence rehabilitation project that is aimed at protecting at least 45,000 persons in several areas from floods and help improve investor confidence especially in agriculture.

Officials said the Barbados-based CDB would contribute US$25 million and the Guyana government US$5,903 million to the sea and river defence resilience project.

Finance Secretary, Dr. Hector Butts told the project launch workshop that Guyana could not afford a recurrence of the 2005 massive flood that negatively impacted on agriculture, a major contributor to economic growth. “Those who chose this approach to get this loan, I commend them because it leads to what I call a friendly eco-system that builds confidence of investors where they do not have that fear, especially in agriculture, that they are likely to be flooded and once that confidence is built we can see increased investment which will meet the needs of Guyana in terms of employment and meets the aspect of the good life,” he said.

The workshop is aimed at educating and refreshing participants about timely and high quality project implementation.

CDB’s Portfolio Manager, William Ashby said the US$30.9 million project would see the reconstruction and improvement of 5.4 kilometers of sea and river defence infrastructure through its flood protection infrastructure component.  At least 45,000 persons in about 9,000 households in Regions Two, Three, Four and Six would benefit from the project. “A team of engineering consultants have been engaged and their job would be to ensure that designs are completed to standards that are such that the infrastructure can serve the purpose intended and to ensure that it is constructed in accordance with those designs,” he said.

Ashby also announced that provision has been made for a shoreline change monitoring system, enhancement of the Geographical Information System-driven shoreline monitoring system and the training of Works Services Group staff of the Ministry of Public Infrastructure.

The CDB official said community awareness and education would include the importance of mangroves as a sea-defence mechanism and other requirements for improving and maintaining sea and rover defences.

The bulk of Guyana’s more than 745,000 persons live along most of the country’s  430 kilometre-long coastline.