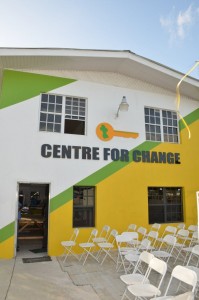 The Alliance For Change (AFC) on Wednesday announced that Attorney-at-Law, Nigel Hughes has put his resignation as party Chairman on hold until a review is conducted, following a meeting with party leader, Khemraj Ramjattan.

“After a most productive working session it was agreed that Chairman Hughes’s resignation will not take effect at this time and he will instead proceed on a leave of absence from the duties and responsibilities of Chairman for a period of reflection and review after which a mutual decision will be taken,” the party said in a statement.

But Hughes told Demerara Waves Online News that “I have not put anything on hold” and he subsequently sent what he said was a statement that he had agreed to that says “After a most productive working session it was agreed that  consideration by the Party of  Chairman Hughes’s resignation letter will be deferred and he will instead proceed on a leave of absence from the duties and responsibilities of Chairman for a period of reflection and review after which a mutual decision will be taken.”

Demerara Waves Online News was told by a well-placed source that Hughes would make a firm decision in another two months about his post of Chairmanship.

Hughes resigned following the issuance of a post-retreat statement that called for Minister of State, Joseph Harmon’s powers to be reduced in the wake of certain questionable decisions that he had made in recent weeks.

Emerging from that high-level “frank discussions” that included AFC, General Secretary, David Patterson the party said during the period under review Hughes would continue to serve the party and contribute to various policy and legal areas in keeping with its electoral promises. “It was further agreed that during the interregnum of his absence from active duties as Chairman he will continue political and policy work on behalf of the Party by concentrating his efforts on three critical and important pillars of the AFC’s agenda, those being Constitutional Reform, Broadcast Legislation and other core legal matters which the AFC has committed itself to advance in the interest of the Guyanese society,” the party said.

The AFC said that Hughes has reiterated firmly and unequivocally that he remains fully committed to the AFC and its development agenda for the country and he would remain an active and vocal member of the Party. “The leadership of the AFC wholeheartedly recognises the significant contribution of the Chairman of the Party and accepts his decision to recalibrate his focus and attention at this time as the Party continues its historic mission on setting Guyana on a firm and steady path of sustained progress.”

Less than one day after news broke that Hughes had resigned from the AFC’s Chairmanship, he said on Facebook that his post had become “difficult and untenable.”  This is not the first time that he has resigned and recanted his decision.