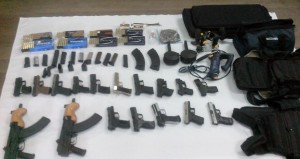 Guyana’s Police Commissioner, Seelall Persaud has denied objecting to the introduction of a computerized system that is geared to track legal and illegal firearms.

“In the four years of the development of the Firearm Management Module the Commissioner of Police has never objected to the module, and he did not object at the recent meeting at the Ministry of Public Security,” the Police Force said in a statement.

Instead, the Commissioner of Police said he had indicated that there were some higher priorities for the police such as the need to link with other databases that are needed more often. “The Commissioner also said that what is higher in the priority for the Police is the link with databases of the Inter-agency Module which will see police ranks accessing the GRA (Guyana Revenue Authority) motor vehicle information as well as other information that they would require for day to day use,” the police force said in a statement.

Noting that the Firearm Management Module was in the making for over some four years now in the Integrated Crime Information System, the force said the Police Commissioner recently told a meeting that more money was needed before that module could be up and running.

“At a meeting held recently at the Ministry of Public Security with the Minister and officials of Brain Street group that had been contracted to construct the Integrated Crime Information System, the Commissioner of Police indicated that in order for the entity to operationalise the Firearm Management Module, the system would require computers and that will only be realised from budgetary allocations, most likely in 2017,” the Guyana Police Force said in a statement.

The Firearm Module is expected to help law enforcement agencies easily determine whether a gun is illegal or not. “If a gun is seized, checks would be made to the database of registered firearm holders for a match. It would even state whether a firearm holder reported his weapon lost or stolen,” a police source has told Demerara Waves Online News.

The Integrated Crime Information System includes 19 separate modules covering areas such as complaints and reports, fire investigations and traffic offences among others.