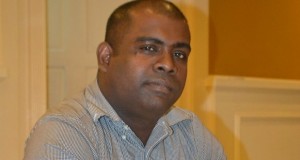 Despite the absence of modern copyright and intellectual property legislation, the Institute of Private Enterprise Development (IPED) is investing millions of dollars in the creative industries.

Chief Executive Officer of that micro-financing institution, Ramesh Persaud said he is not too worried about the limited protection that rights-owners currently have, but instead his lending agency expects the cash-injection would trigger action by government to put in place new legislation.

“That is one of the things that we are hoping, as a result of starting the process lf financing copyright legislation will become very, very important and it is our intention to continuously raise it as an issue and to copy lobbying for the importance of it,” Persaud told Demerara Waves Online News.

With IPED having already set aside GYD$50 million its 2016 budget to provide support to the creative industries, Persaud does not believe that money is about to be wasted. “I still believe without the legislation there are still some opportunities but there will be greater opportunities if the legislation comes on board,” he said.

Guyana is yet to replace the 1956 Copyright Act that was inherited from Britain at the time of independence 50 years ago. . Minister of Education, Dr. Rupert Roopnaraine had promised last year August that Guyana would get Intellectual Property Law within one year.

Only recently, Tourism Minister Cathy Hughes reiterated that government was taking steps to enact a new copyright law. “I am also excited, too, that  on the parliamentary agenda is the issue of copyright legislation and also the whole issue of intellectual property because, as we know, we have musicians today that have publicly stated…that they no longer want to produce music if they cannot guarantee that their works are protected,”  she said recently.

Hughes said so far the major incentive being provided by government to musicians is a tax-waiver. “It means that when you look at the bottom-line, it makes it a little more profitable for performers to be able to hold shows and to be able to cover their costs and most importantly to put aside something from those performances that can lead to the development of their specific art form,” she said.

Guyanese musicians have repeatedly complained that their works are copied without permission and sold cheaply, in some cases for about US$1.00) on music carts.

IPED is also providing GYD$300 million for non-traditional agriculture and GYD$150 million to support business ideas and ventures by persons younger than 30 years.