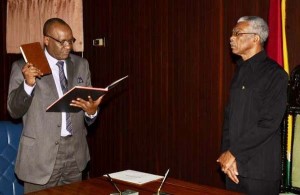 Prime Minister Moses Nagamootoo Monday night declared that Minister of State, Joseph Harmon is an “honest person” but he and President David Granger differ on whether Harmon’s powers should be reduced.

“This has nothing to do with an indictment of anyone in particular Minister Harmon. I subscribe to the view also that he is an honest person. I have worked with him. I have nothing about his integrity,” Nagamootoo said.

Speaking with reporters after Demerara Distillers Limited (DDL) launched its 50-year old rum in honour of Guyana’s 50th Independence Anniversary, Nagamootoo suggested that Harmon should be disciplined for appointing Brian “BK” Tiwari a ministerial advisor on business development. “In the context of what is alleged in the BK Tiwari issue, I can see no violation of honesty,” he said.

After public outcry, Granger last month rescinded Tiwari’s appointment that was made on January 29, 2016.

For his part, the President did not answer directly whether Harmon would be disciplined  Harmon had also ordered the Guyana Revenue Authority to abort an operation to seize two luxury vehicles from Baishan Lin for alleged non-payment of duties.  The vehicles were subsequently seized and President Granger later said he has ordered that there be no intrusion in the work of other ministers.

As it relates to the Alliance For Change’s (AFC) intention to ask that Harmon’s several powers be cut, the President said he would await representation at Cabinet on Tuesday although so far he did not see any justification for doing so. “There is a book that stated and nobody made any objection to the duties which were assigned to the Minister of State then and it would be surprising if after two months people feel that the duties have been misused or they need to be trimmed so I have to wait to find out from our colleagues but as far as I am concerned there is no overburdening of the ministry and I don’t seen any powers that they need to be reduced,” the President told reporters.

The Prime Minister, who is the AFC’s Vice Chairman, reiterated his party’s position that some of Harmon’s responsibilities such as Cabinet Secretary should be taken away and handed to a public servant or retired public servant who understands the importance of confidentiality and secrecy. “We are talking not about person, we are talking about responsibilities to diffuse or share responsibilities so that it may not be too cumbersome on one person to handle and juggle many portfolios and make for me the work of office easier and one can concentrate on a specific limited area of functions,” Nagamootoo said.

Reacting to Tiwari’s call that in fairness he should revoke the appointment of all other ministerial advisors, the President rebuffed the prominent businessman. “I wouldn’t respond to Mr. Tiwari and Mr. Tiwari doesn’t determine my policy,” he said.

Tiwari, who said he knew Harmon before the May 11, 2015 general and regional elections, noted that he had been offering his advisory services free of cost.