GTUC, FITUG uniting on common issues, one May Day rally 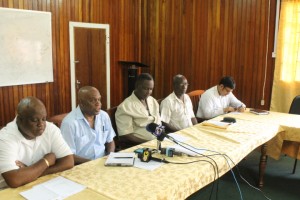 Representatives of GTUC and FITUG at a joint news conference at the GTUC’s Headquarters, Woolford Avenue, Georgetown.

The country’s fractured trade union movement does not appear to be in a hurry to re-unite under one umbrella of the Guyana Trades Union Congress (GTUC), although the two federations are planning to collaborate on a range of issues and hold one May Day rally.

GTUC General Secretary, Lincoln Lewis side-stepped questions about whether his organisation and the breakaway Federation of Independent Trade Unions of Guyana (FITUG) were now closer to patching up their differences. Instead, he said it was not so much about the unification of both organisations but about common positions on various labour issues.

“We have a focus- a united labour movement but we are not talking about unity. We are talking about issues that can unite us at this juncture

Lewis said those issues include the improvement of education quality, health service, labour laws and governance that impact on workers. “We are working together to make sure that those are things that are on the agenda we are working on,” said Lewis, a veteran trade unionist, adding that trade union unity was not about the appointment of certain members to executive positions. “What we believe in is that we must be guided and bounded by principles,” he said.

However, FITUG’s General Secretary hoped that the unions under his organisation would eventually return to the GTUC, after more than two decades of separation over concerns about lack of accountability, ‘paper unions’  and the out-maneuvering of the Guyana Agricultural and General Workers Union (GAWU) from being elected to the GTUC’s presidency.  “FITUG is not averse to becoming affiliated once again to the GTUC because we are trade unionists and the division or difference between us is that we are not affiliated,” he said.

When the PPPC was in power up to one year ago,  the President and several government ministers had attended the FITUG-organised rally in the National Park, while the GTUC’s rally had been attended by top executives of the then opposition People’s National Congress Reform (PNCR)- later A Partnership for National Unity (APNU).

Meanwhile, the GTUC and FITUG dismissed any suggestion that the Guyana government was influencing the holding of one Labour Day rally for the first time in decades. “Let it be known that the question of the organisation and execution of May Week or May Day march or rally falls squarely within the remit of the trade union movement and as a movement we are not going to, at any point in time, allow anyone or any organisation irrespective of who they may be to attempt to usurp the functions and responsibility of this movement,” GTUC Vice President, Norris Witter said.

Minister responsible for labour, Keith Scott had said months ago that he had been making efforts to ensure that there is one May Day rally in 2016.

GTUC and FITUG affiliates usually share the same  route for the May Day march but separate themselves at the corner of Woolford Avenue and Albert Street where most of GTUC affiliates go to Critchlow Labour College and FITUG’s head to the National Park. The Guyana Teachers’ Union’s (GTU) contingent goes to its union headquarters.