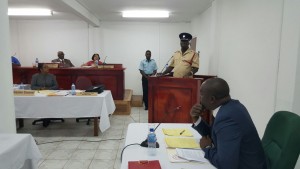 The Officer in Charge of Operation at the Guyana Fire Service Compton Sparman has testified that he felt that his wellbeing was at stake while tending to fires lit by inmates at the Camp Street Prison on Wednesday March 3.

Sparman, testifying at the Commission of Inquiry into the Camp Street Prison riot, told the Commissioners that the prisoners were throwing rocks, and hurling derogatory comments at the firemen and other members of the disciplined services that were on the scene.

While being questioned  by Prison Service Attorney Eusi Anderson, Sparman recalled that the fire service was forced to go into “defence mode.”

“They were throwing bricks at us and threatening us…being a resident of Albouystown…I know you…when I get out I will deal with you,” he said noting that despite the threats the firemen stood their ground.

“My personal security…I felt threatened simply because if for whatever reason they were to get out of their cells…if the cells were breached we would have been the targets simply because we were the ones extinguishing the fires,” Sparman later told the Commission of Inquiry.

He said that the Fire Service officials were given all assurances that the men could not breach the security systems hence work continued to address the flames.

“Oxygen would have been a limitation. Fires depend on three factors, combustibility, the rate of fire spread and the time… it was night and low breeze at the time…that gave us the advantage,” he stated.

Speaking of what happened on the second day of the riot, the career fireman stated that when he arrived at the scene, the entire of Capital A was in flames and he was scared.

He also recalled asking Deputy Prisons Director Gladwin Samuels whether there were systems in place to evacuate the prisoners caught in the blaze and was told that they refused to exit the building.

“I asked the question if there were systems in place for the persons to come out and he said plain they don’t want to come out…they refused to evacuate.”

Sparman said that he was emotionally affected by the inmates being burned in the fires.

“It affected me as to why these inmates wanted to stay in the fire and why were they behaving in that manner,” he said later adding “the scene was very traumatic…I wish it had never occurred, it was one of confusion one of chaos.” (Jomo Brusheildon Paul)