President David Granger’s cabinet shortly after the May 11, 2015 general and regional elections.

The APNU+AFC Administration has been accused of bullying the private sector to make donations to special projects and more specifically to make contributions to the 50th Anniversary Jubilee celebrations.

Sources have reported to Demerara Waves that the administration is asking that businessmen donate as much as $5M to the Jubilee Festival expected to get into full swing in May.

As those concerns were raised, the Chief Whip of the Opposition People’s Progressive Party (PPP) also stated that the private sector was being extorted. 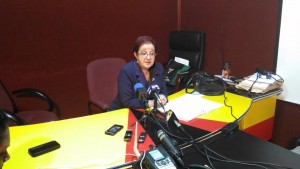 At a recent press conference, Teixeira reported that businessmen are being asked to donate to the APNU+AFC or to specific projects.

She labeled the development a “dangerous trend” noting that it allows for the society to be permeated with “fear and intimidation.”

However Administration is denying the allegations.

Telecommunication and Tourism Minister Cathy Hughes at a recent GTT donation press conference made it clear that this was not the case.

Responding directly to the concerns raised by Teixeira, Hughes stated that she had reached out via letters to a number of corporate citizens.

“I am excited and very happy to say that I have not had to bully anybody…most Guyanese are excited that we are 50 and most Guyanese are approaching the Ministry of Tourism and saying what are you doing and how is it that we can get involved,” said the Minister.